Man Utd will look to close in on the top four when they take on Newcastle at St James Park on Tuesday night. Here is the side I think van Gaal will pick:

Manchester United will look to close in on the top four when they take on Newcastle United at St James Park on Tuesday night. Here is the side I think van Gaal will pick:

Goalkeeper: David de Gea is certain to start between the sticks once again on Tuesday night.

Defence: van Gaal is expected to make at least one change to the back four which started Saturday’s narrow 1-0 FA Cup victory over Sheffield United with Ashley Young possibly coming in for youngster Cameron Borthwick-Jackson.

There has been no update on the fitness of Phil Jones so we have to assume he’s still out with a foot injury so Daley Blind is likely to continue alongside Chris Smalling at the back with Matteo Darmian switching to left-back. Antonio Valencia, Marcos Rojo and Luke Shaw all remain out through injury.

Midfield: Bastian Schweinsteiger is set to miss the trip to the North East after suffering a knee injury at the weekend so Morgan Schneiderlin is expected to come back in to the starting eleven. Michael Carrick could also be set for a recall in midfield with Marouane Fellaini likely to drop back to the bench.

Attack: United fans were left frustrated again on Saturday with the team showing very little threat in the final third but I don’t see van Gaal making too many changes so we should see Anthony Martial, Juan Mata and Ander Herrera once again supporting Wayne Rooney in attack. 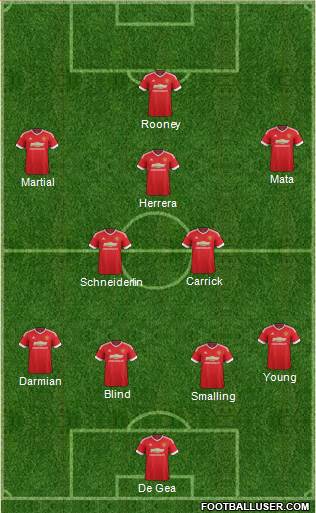