Chelsea entertain West Bromwich Albion at Stamford Bridge on Wednesday night. Here is the side we think Guus Hiddink will select for the game:

Chelsea will look to extend their unbeaten run to six games when they entertain West Brom at Stamford Bridge on Wednesday night. Here is the side we think Guus Hiddink will select for the game:

Goalkeeper: Thibaut Courtois is set for a recall with Asmir Begovic dropping to the bench after his run-out against Scunthorpe at the weekend.

Defence: Hiddink is likely to make a one change to the back-four that started during the FA Cup win on Sunday with John Terry coming back in after being rested. Gary Cahill is probably the man most likely to make way with Kurt Zouma keeping his place in the back four along with Cesar Azpilicueta and Branislav Ivanovic.

Midfield: Cesc Fabregas is likely to keep his place in the middle of the park while John Obi Mikel could be given the nod ahead of Nemanja Matic as Hiddink has been favouring the Nigerian international following his arrival at Stamford Bridge.

Attack: Diego Costa has been passed fit despite picking up a knock on Sunday so the Spanish international should continue up front. However, Eden Hazard has once again been ruled out with a minor groin injury so Pedro should continue in the attack along with Willian and Oscar. Radamel Falcao remains injured but Loic Remy could be back on the bench after recovering from a calf injury. 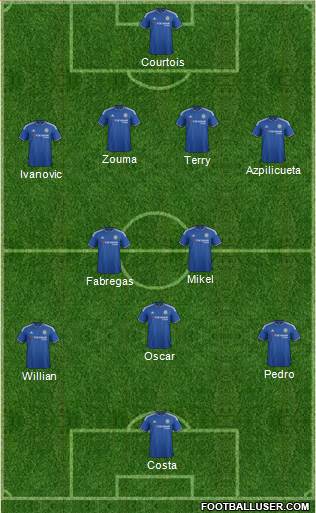