Arsenal take on Stoke City at the Britannia Stadium on Sunday afternoon. Here is the side Gooner Mac thinks Arsene Wenger will select for the game:

Arsenal will look to cement their place at the top of the table when they take on Stoke City at the Britannia Stadium on Sunday afternoon. Here is the side Gooner Mac thinks Arsene Wenger will select for the game:

Goalkeeper: Petr Cech is almost certain to keep his place in goal despite shipping three goals during the 3-3 draw at Liverpool in midweek.

Defence: The boss is expected to stick with the same back four that started at Anfield so Per Mertesacker should keep his place in defence ahead of Gabriel with the German international starting alongside Laurent Koscielny.

Hector Bellerin will keep his place at right-back while Nacho Monreal should keep Kieran Gibbs on the bench after another solid display at left-back last time out.

Midfield: Mohamed Elneny is eligible to make his debut but I think the Egyptian international may have to wait as Arsene has suggested he’s unlikely to throw him straight into action this weekend after only joining the club on Thursday.

Mathieu Flamini was a little below par against Liverpool so I wouldn’t be surprised to see Calum Chambers come back in as the youngster played very well against Sunderland last weekend and has shown some promise in the holding role. Jack Wilshere, Santi Cazorla and Francis Coquelin remain unavailable so Aaron Ramsey will keep his place in midfield.

Attack: Alexis Sanchez faces a late fitness test but I expect the Chilean international to be passed fit and start in attack after recovering from a hamstring injury. Joel Campbell has been in superb form so he could keep his place with Theo Walcott dropping out after a frustrating performance at Anfield.

Mesut Ozil is certain to keep his place in attack and he’ll hopefully be supplying the bullets behind Olivier Giroud – who was outstanding against Liverpool in midweek so should once again lead the line up front. 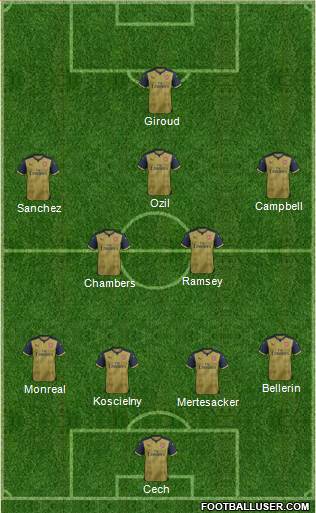