With the winter transfer window in full swing, manager’s are working hard trying to strengthen their squads ahead of the second half of the season. Today, the race hots-up for Odion Ighalo….. 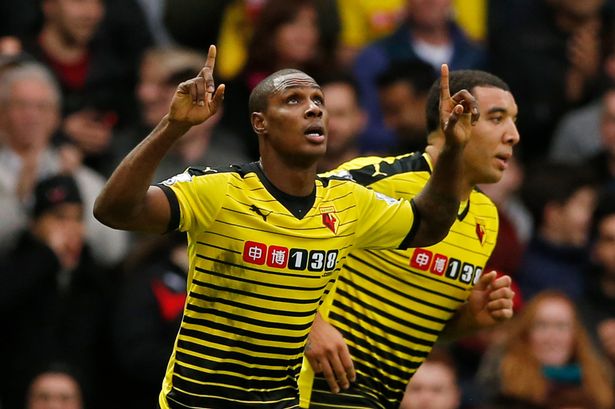 Chelsea have joined Arsenal and Manchester United in monitoring Watford striker Odion Ighalo ahead of a potential big-money swoop this summer, according to the Mirror.

Ighalo has been a revelation since moving to Watford in 2014 with the striker netting 20 goals in 38 games to help them clinch promotion to the Premier League during his debut season in England.

The 26-year-old has continued that stunning form in front of goal in the top flight with Ighalo scoring 13 times in his 23 appearances so far this campaign, and unsurprisingly some of the big-boys are sitting up and taking notice.

The Mirror claim that Chelsea have now joined Arsenal and Manchester United in showing a keen interest in the Nigerian international as the trio make preparations to add to their strike-force’s this summer.

Chelsea have struggled in front of goal this season and with Radamel Falcao expected to leave when his loan expires and doubts surrounding the long-term future of Loic Remy at Stamford Bridge, it seems the Blues have short-listed Ighalo as a potential new addition.

Arsenal have also been tipped to bring in fresh competition for Olivier Giroud up front while United could certainly do with another option through the middle with the Red Devils relying heavily on Wayne Rooney for goals this season.

Ighalo would be an excellent signing for any of the three clubs as he’s proved he’s more than capable of cutting it at the highest level and he’s shown great composure in front of goal for Watford this season.

The Hornets are no doubt going to face a tough time holding on to their star striker in the summer and it looks like Ighalo could have several options if he wants to remain in the Premier League, but Arsenal, Chelsea and United will have to be prepared to dig deep as I can’t imagine Watford will sell him on the cheap.