Arsenal take on London rivals Chelsea at the Emirates on Sunday afternoon. Here is the side Gooner Mac thinks Arsene Wenger will select for the game:

Arsenal will look to cement their place at the top of the table when they take on Chelsea at the Emirates on Sunday afternoon. Here is the side Gooner Mac thinks Arsene Wenger will select for the game:

Goalkeeper: Petr Cech is certain to keep his place in goal and he’ll be looking to impress against his former club.

Defence: The boss is expected to stick with the same back four that started during the 0-0 draw at Stoke City last weekend so Per Mertesacker should keep his place in defence ahead of Gabriel with the German international starting alongside Laurent Koscielny at the back.

Hector Bellerin and Nacho Monreal have firmly established themselves as our starting full-backs ahead of Mathieu Debuchy and Kieran Gibbs so they’ll continue at the back this weekend.

Midfield: Mohamed Elneny failed to make his debut off the bench against Stoke so I can’t see Wenger throwing him straight in to action against Chelsea on Sunday. Francis Coquelin is back in training but is still short of match fitness and with Santi Cazorla and Jack Wilshere also still unavailable, Mathieu Flamini should continue alongside Aaron Ramsey this weekend.

Attack: Alexis Sanchez is set to return to the squad after eight weeks on the sidelines with a hamstring injury and the Chilean international should come straight back in to the team if he’s deemed fit enough to start by the clubs medical team.

Joel Campbell has performed extremely well in recent weeks but I have a feeling he’ll still be the one to make way for Sanchez with Theo Walcott keeping his place on the wing. Mesut Ozil is certain to return to the side after missing the trip to the Britannia last weekend with a minor knock while Olivier Giroud should once again lead the line up front. 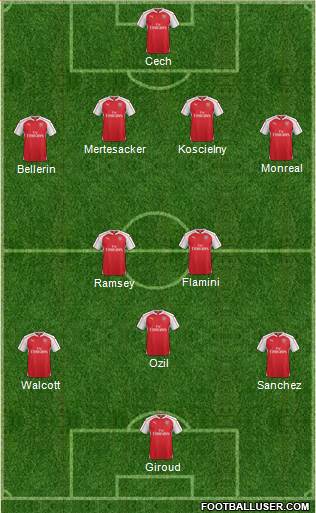