Liverpool, Arsenal, Chelsea, Man City, Man Utd and Tottenham all found out who they’ll be playing in the fifth round of the FA Cup….see the draw here

Liverpool, Arsenal, Chelsea, Man City, Man Utd and Tottenham all found out who they’ll be playing in the fifth round of the FA Cup….

The draw for the fifth round of the FA Cup has been conducted this evening and as usual it’s thrown up some intriguing ties.

Holders Arsenal booked their place in the next phase with a hard fought 2-1 victory over Burnley at the Emirates on Saturday and Arsene Wenger’s men have been drawn to play Hull City for the third consecutive season.

No doubt the tie of the round sees Chelsea entertain Manchester City at Stamford Bridge. The Blues booked their place in the fifth round draw after beating MK Dons 5-1 this afternoon while City beat Aston Villa 4-0 yesterday.

Manchester United put their Premier League woes behind them with a 3-1 win over Derby County on Friday night and Louis van Gaal will now face a trip to League One Shrewsbury Town in the next round.

Tottenham Hotspur eased in to the next round after beating Colchester 4-1 yesterday and Mauricio Pochettino’s side will now host Crystal Palace at White Hart Lane.

Liverpool were held to a 0-0 draw by West Ham last night and the winners of the replay at Upton Park will take on Blackburn Rovers at Ewood Park.

I’m sure Arsenal, Spurs and Man Utd will all be confident of progressing to the quarter finals which could be a tasty affair with several of the big boys looking odds on to make it through to the last eight.

The ties will be played on the weekend of 20/21st February. 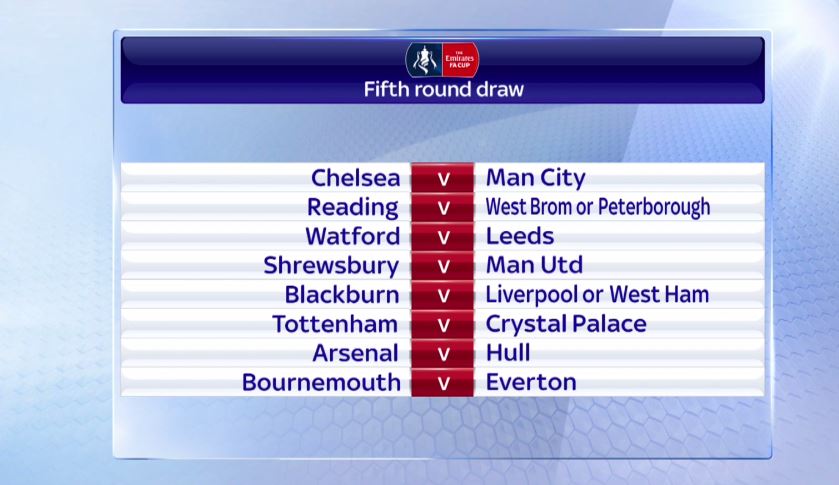