Arsenal take on Bournemouth at Dean Court on Sunday afternoon. Here is the side Gooner Mac thinks Arsene Wenger will select for the game:

Arsenal will look to get their title charge back on track when they take on Bournemouth at Dean Court on Sunday afternoon. Here is the side Gooner Mac thinks Arsene Wenger will select for the game:

Goalkeeper: Petr Cech will be a certain starter this weekend as the Czech international has been one of our very best performers throughout the season.

Defence: Per Mertesacker could be set for a recall after only being named on the bench for Tuesday night’s 0-0 draw with Southampton. Gabriel did well enough in midweek but I think we’ll see the giant German back alongside Laurent Koscielny for this tricky away clash.

Hector Bellerin is set to continue at right-back while Nacho Monreal should also retain his place ahead of Kieran Gibbs at left-back.

Midfield: Francis Coquelin wasn’t risked from the start against Southampton after making his first appearance in over two months against Burnley last weekend. However, I expect to see the Frenchman come in for Mathieu Flamini on Sunday and start alongside Aaron Ramsey in midfield. Mohamed Elneny missed out in midweek with a minor knock but he could be back in the squad against Bournemouth.

Attack: Alexis Sanchez has shown no signs of rustiness following his return from injury so the Chilean international should continue in attack alongside Mesut Ozil but it will be interesting to see who Wenger goes with on the right wing.

Joel Campbell was very quiet in midweek so I wouldn’t be surprised if we saw Theo Walcott come back in to the starting eleven on Sunday after being left on the bench against the Saints.

Danny Welbeck is back in full training but this game comes too soon for the England international so Olivier Giroud is likely to start up front once again. 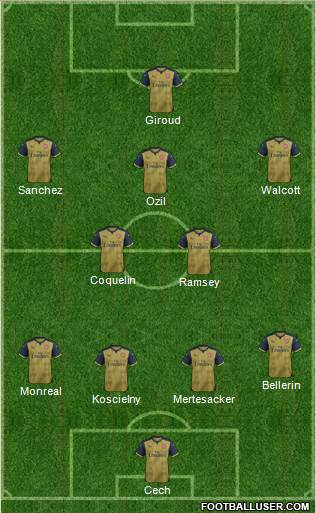