Chelsea take on Manchester United at Stamford Bridge on Sunday afternoon. Here is the side we think Guus Hiddink will select for the game:

Chelsea will look to continue their climb up the Premier League table when they take on Manchester United at Stamford Bridge on Sunday afternoon. Here is the side we think Guus Hiddink will select for the game:

Defence: Hiddink is unlikely to make many changes to the defence that earned a clean sheet at Watford on Wednesday night so we should once again see Kurt Zouma start alongside skipper John Terry in the middle of defence with Gary Cahill among the substitutes.

Midfield: John Obi Mikel has cemented himself as an important member of the first team since Hiddink arrived at the Bridge so the Nigerian international should keep his place in midfield while I expect Nemanja Matic will also be deployed to give Chelsea a solid base in the middle of the park in front of their defence.

Attack: Cesc Fabregas should play in a more advanced central role with Willian once again playing from the right wing. Eden Hazard was only named on the bench for the draw at Watford so I expect the Belgian international to get a recall against United on Sunday.

Alexandre Pato is training hard to regain his match fitness but Hiddink has hinted he won’t be called upon just yet so he’ll miss this game along with Loic Remy and Radamel Falcao – who are both injured. So Diego Costa will once again lead the line up front. 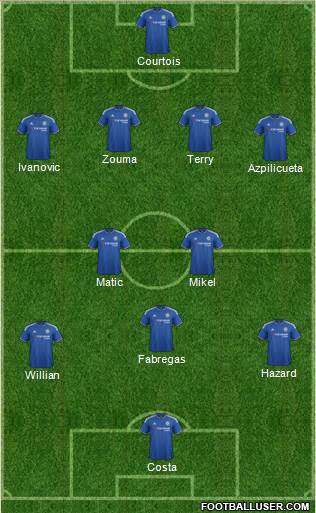