Manchester United take on Sunderland at the Stadium of Light on Saturday afternoon. Here is the side I think van Gaal will pick for the big game.

Manchester United will look to give their top four hopes a major boost when they take on Sunderland at the Stadium of Light on Saturday afternoon. Here is the side I think van Gaal will pick:

Defence: van Gaal is unlikely to tamper too much with the back four that started during last weekend’s 1-1 draw at Chelsea so Matteo Darmian should continue at right-back after making a successful return from injury recently.

There has been no update on the fitness of Phil Jones so Daley Blind is expected to continue alongside Chris Smalling while Cameron Borthwick-Jackson should keep his place at left-back after an impressive showing at Stamford Bridge.

Antonio Valencia, Ashley Young, Luke Shaw and Marcos Rojo are all still out with long-term injuries.

Midfield: Bastian Schweinsteiger remains out with a niggling knee injury but we could see van Gaal bring Morgan Schneiderlin back in to the team alongside Michael Carrick in order to give a more solid base in front of the back-four for this tricky away tie. That would see Marouane Fellaini dropping to the bench.

Attack: Ander Herrera could also get a recall to the starting eleven if van Gaal wants to tighten things up in the middle of the park. Juan Mata could be the man to drop out as Jesse Lingard should keep his place after scoring a superb goal against Chelsea while Anthony Martial should keep his place in attack along with Wayne Rooney. 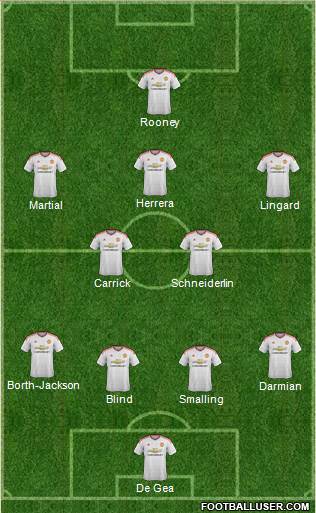