Arsenal take on league leaders Leicester City at the Emirates on Sunday afternoon. Here is the side Gooner Mac thinks Arsene Wenger will select for the game:

Arsenal will look to give their title charge a major boost when they take on league leaders Leicester City at the Emirates on Sunday afternoon. Here is the side Gooner Mac thinks Arsene Wenger will select for the game:

Goalkeeper: Petr Cech will be a certain starter this weekend as the Czech international has been one of our very best performers throughout the season.

Defence: Per Mertesacker is pushing for a recall after being left on the bench in recent weeks but I think the boss will stick by Gabriel for this one as Leicester are a potent threat on the break with their pace so the Brazilian is more capable of dealing with the likes of Jamie Vardy and Rayid Mahrez than the experienced German.

So I think we’ll see the same back four that kept a clean sheet at AFC Bournemouth last weekend with Laurent Koscielny, Hector Bellerin and Nacho Monreal all also keeping their places.

Midfield: However, I do expect to see one change in midfield with Francis Coquelin coming back in to the starting eleven in place of Mathieu Flamini. Coquelin has only recently returned from a lengthy injury absence and wasn’t risked last time out but he should be ready to start alongside Aaron Ramsey after getting another full weeks training under his belt.

Attack: It’s going to be interesting to see who Wenger goes with in the right-wing spot but I have a feeling he may go with Theo Walcott as he performed well in the reverse fixture, which saw us win 5-2, and he has the pace to hurt Leicester in behind their defence.

Alexis Sanchez and Mesut Ozil are certain to start while Olivier Giroud will be looking to end his goal drought as he’s expected to lead the line up front once again. Danny Welbeck is back in full training and has an outside chance of making the bench, but he’ll more than likely be kept back for next weeks FA Cup tie. 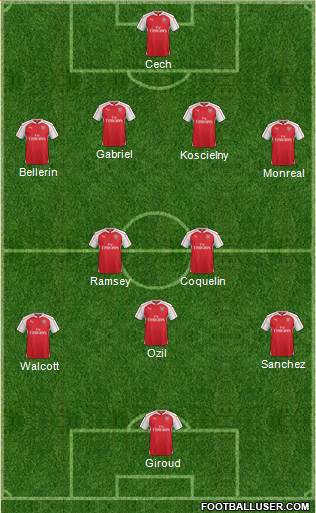