Chelsea take on PSG tomorrow night in the first leg of their Champions League last-16 tie. Here is the side we think Guus Hiddink will select for the game:

Chelsea take on Paris Saint-Germain at the Parc des Princes tomorrow night in the first leg of their Champions League last-16 tie. Here is the side we think Guus Hiddink will select for the game:

Defence: Hiddink is going to be forced in to making at least one change to his back four after John Terry was left back in London nursing a hamstring injury that he suffered during Saturday’s 5-1 win over Newcastle United.

With Kurt Zouma also out for the remainder of the season with a knee injury, Branislav Ivanovic is set to start alongside Gary Cahill in the middle of defence with Cesar Azpilicueta and Baba Rahman filling the full-back spots.

Midfield: Nemanja Matic is suspended for this game so John Obi Mikel should come back in to the side after the Nigerian international was rested on Saturday while Cesc Fabregas should drop back in to a more defensive role in midfield.

Attack: Oscar has been declared fit despite missing the Newcastle game with a minor calf injury and the Brazilian could come straight back in to the starting eleven tomorrow. This could see Pedro drop out despite the Spaniard scoring twice at the weekend as you’d expect both Eden Hazard and Willian to retain their places alongside Diego Costa in attack. 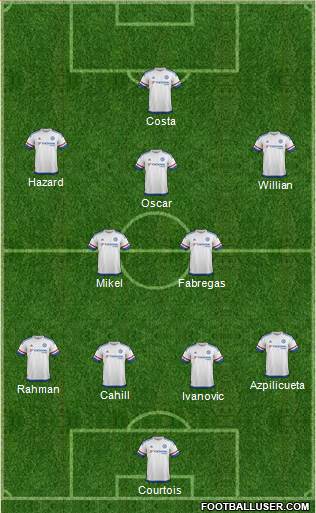