Man Utd will look to secure a first leg advantage when they take on Midtjylland in the Europa League on Thursday. Here is the side I think van Gaal will pick:

Manchester United will look to secure a first leg advantage when they take on FC Midtjylland in the Europa League on Thursday night. Here is the side I think van Gaal will pick:

Defence: van Gaal has problems in defence as Matteo Darmian has been ruled out with a dislocated shoulder and with Phil Jones, Antonio Valencia and Ashley Young also out through injury, Paddy McNair may be deployed at right-back.

Chris Smalling and Daley Blind are set to continue in the middle of defence but Cameron Borthwick-Jackson hasn’t travelled due to illness so with Marcos Rojo and Luke Shaw out injured, youngster Joe Riley could start at left-back after impressing for the under-21’s this term.

Midfield: Bastian Schweinsteiger remains out with a niggling knee injury while Marouane Fellaini is once again out with a muscle problem so Morgan Schneiderlin should continue alongside Michael Carrick in the middle of the park.

Attack: United have been rocked by the news that Wayne Rooney is facing up to two months out with a knee injury so Anthony Martial is set to move in to the central striking role. This could open the door for Ander Herrera to return to the starting line-up alongside Juan Mata and Jesse Lingard in attack. 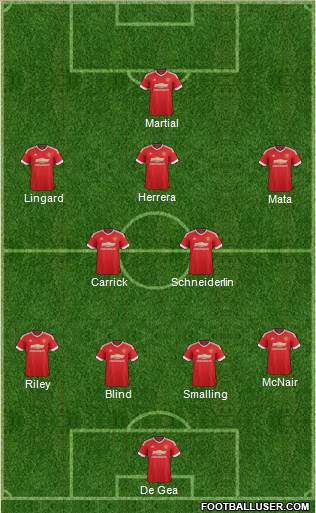