Arsenal take on Hull City in the FA Cup at the Emirates on Saturday afternoon. Here is the side Gooner Mac thinks Arsene Wenger will select for the game:

Arsenal will look to book their place in the quarter finals of the FA Cup when they take on Hull City at the Emirates on Saturday afternoon. Here is the side Gooner Mac thinks Arsene Wenger will select for the game:

Goalkeeper: Petr Cech is expected to be given a well-earned rest with David Ospina coming in to make a rare start in goal.

Defence: Laurent Koscielny is facing a late fitness test after being forced off at half-time during Sunday’s win over Leicester with a dead leg but I don’t think the Frenchman will be risked so Calum Chambers should start alongside Per Mertesacker. Gabriel is out due to a hamstring injury.

Hector Bellerin will most likely start once again but we could see Kieran Gibbs come in for Nacho Monreal if he recovers from a minor knock.

Midfield: Wenger is expected to make plenty of changes to his midfield and attack with several key players given a rest ahead of Tuesday’s Champions League showdown with Barcelona.

Aaron Ramsey and Francis Coquelin should be given a breather with Mathieu Flamini recalled and Wenger has hinted that Mohamed Elneny is set to make just his second start following his January move from FC Basel.

Attack: Danny Welbeck could be handed his first start in over 10 months after coming off the bench to score a priceless winner against Leicester City while Theo Walcott is also expected to start after also scoring off the bench last time out.

Alex-Oxlade-Chamberlain should keep his place while Joel Campbell is likely to come back in with Mesut Ozil, Alexis Sanchez and Olivier Giroud all rested. 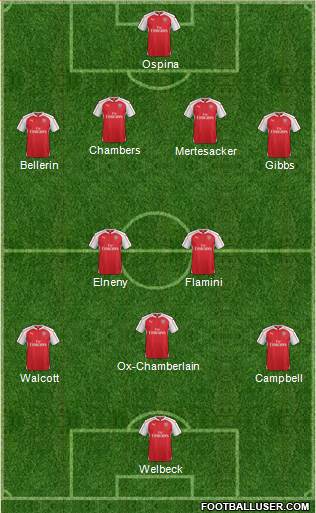