Chelsea take on Manchester City at Stamford Bridge in the fifth round of the FA Cup on Sunday. Here is the side we think Guus Hiddink will select for the game:

Chelsea take on Manchester City at Stamford Bridge in the fifth round of the FA Cup on Sunday afternoon. Here is the side we think Guus Hiddink will select for the game:

Defence: Hiddink has said he’ll resist the temptation to make wholesale changes to his side as the FA Cup is a realistic target to salvage something from what’s been a hugely disappointing season for the Blues.

The Dutchman doesn’t have too many options to rotate at the back anyway as Kurt Zouma is out for the season with a knee injury while John Terry has been ruled out with a hamstring strain. Branislav Ivanovic will therefore continue alongside Gary Cahill at the back while Cesar Azpilicueta and Baba Rahman should remain in the full-back spots.

Midfield: Nemanja Matic is back after being suspended for the midweek Champions League defeat at PSG so he should get a recall while I also expect Ruben Loftus-Cheek to get a run-out in midfield. That would see John Obi Mikel and Cesc Fabregas given a well-earned rest.

Attack: Oscar is back after recovering from a calf injury so he could get a recall with Eden Hazard given a breather while Pedro Rodriguez and Willian could retain their places in attack. Alexandre Pato isn’t in contention just yet as he’s still working on his fitness so Diego Costa should once again lead the line up front. 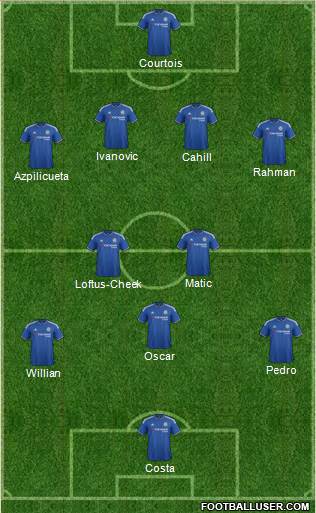