Arsenal, Chelsea and Man Utd all found out who they’ll be playing in the fifth round of the FA Cup….find out the full draw here

Arsenal, Chelsea and Man Utd all found out who they’ll be playing in the fifth round of the FA Cup….

Arsenal were held to a frustrating 0-0 draw by 2014 finalists Hull City on Saturday afternoon and if Arsene Wenger’s men can get through the replay at the KC Stadium, they’ll then welcome Watford to the Emirates in the last eight.

Manchester United take on Shrewsbury Town on Monday night and if Louis van Gaal’s side can book their place in the last eight, they’ll entertain West Ham at Old Trafford in the next round.

Chelsea cruised in to the quarter finals after thrashing an under-strength Manchester City side 5-1 at Stamford Bridge this afternoon and they’ll now face a tough trip to Goodison Park to face Everton.

The other game will see Reading take on Crystal Palace after the Eagles beat Tottenham Hotspur 1-0 at White Hart Lane today.

The tie’s will take place between the 11th and 14th March. Here is a round-up of the draw: 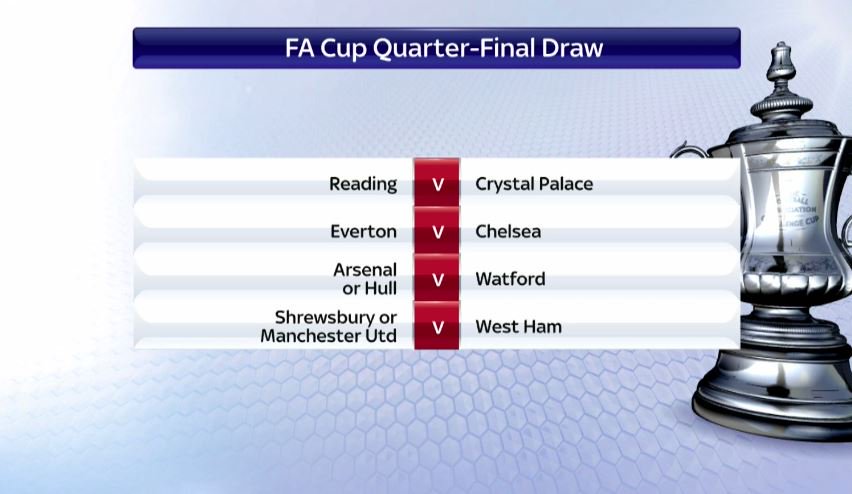