Arsenal entertain Barcelona in the Champions League at the Emirates on Tuesday night. Here is the side Gooner Mac thinks Arsene Wenger will select for the game:

Arsenal will be hoping to secure a first leg advantage when we entertain Barcelona in the Champions League at the Emirates on Tuesday night. Here is the side Gooner Mac thinks Arsene Wenger will select for the game:

Goalkeeper: Petr Cech is certain to come back in to the side after being rested for the FA Cup clash with Hull City at the weekend.. David Ospina will therefore drop to the bench.

Defence: Gabriel has once again been ruled out after failing to recover from a hamstring injury so Per Mertesacker will continue alongside Laurent Koscielny in the middle of defence. Hector Bellerin and Nacho Monreal were rested at the weekend and the Spaniard’s are expected to get recalls tomorrow night with Calum Chambers and Kieran Gibbs dropping out.

Midfield: Wenger is set to recall Francis Coquelin and Aaron Ramsey to his starting eleven after resting the duo against Hull. Mohamed Elneny put in another encouraging performance at the weekend but he’s still set to drop back to the bench against Barca.

Midfield will be a key area in this game and it’s important Ramsey curbs his attacking instincts and doesn’t leave Coquelin exposed too often.

Attack: Danny Welbeck continued his comeback from injury with another lively display against Hull but we should see Olivier Giroud brought back in to the starting eleven tomorrow night.

It will be interesting to see who Wenger goes with on the right as Alex Oxlade-Chamberlain has been a starter recently but I think we might see Theo Walcott given the nod as his pace has always caused Barcelona plenty of problems in the past.

Mesut Ozil and Alexis Sanchez will be recalled to the starting eleven after being given a breather against Hull and we’ll need the duo on top form if we’re to get anything from this game. 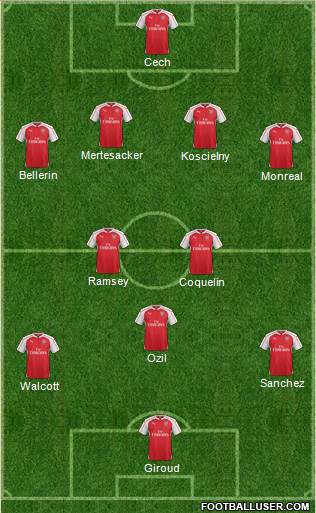