With the winter transfer window closed, manager’s are now looking ahead towards the summer and planning deals for next season. Today, Chelsea are leading the race for Leroy Sane… 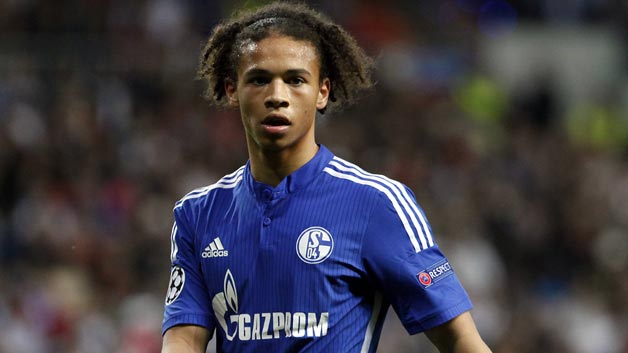 Chelsea are leading the likes of Manchester United and Liverpool in the race to sign Schalke’s £40m-rated attacking midfielder Leroy Sane this summer, according to the Express.

Sane has come through the Schalke youth set-up and has developed in to one of the hottest prospects in European football since breaking in to the first team set-up in 2014.

The 20-year-old is already a regular in André Breitenreiter’s starting eleven and earned his first German cap last year so it’s no surprise that his potential has caught the eye of a whole host of Premier League clubs in recent months.

The Express claim that Liverpool boss Jurgen Klopp is a huge fan of the attacker having watched him closely during his time in the Bundesliga while Manchester United also understood to be keen on Sane but have so far refused to match Schalke’s £40m valuation.

It looks like the duo are now going to face some stiff competition as the newspaper states that Chelsea are now considered as the frontrunners to secure a deal as owner Roman Abramovich is willing to do all he can to take the young attacker to Stamford Bridge this summer.

The Blues are gearing up for another summer overhaul with a new manager set to come in to replace interim boss Guus Hiddink on a permanent basis and it looks as though the Chelsea officials are already working on potential transfer targets.

Sane would be an excellent addition as he’s one of the most gifted young attackers around but obviously a deal to take him to West London is still a long way off and I wouldn’t discount the likes of United or Liverpool just yet.

There are likely to be plenty of clubs in the running if Schalke decide to cash-in this summer and it’s going to be interesting to see where Sane ends up, but I’d love to see him come to the Premier League so hopefully one of Chelsea, Liverpool or United manage to get a deal agreed.