Tottenham will look to book their place in the last-16 of the Europa League when they take on Fiorentina at White Hart Lane tonight.

Spurs came away with a very useful 1-1 draw from the first leg in Florence last week so the North Londoners will be confident of getting the result they need to progress on home soil this evening.

However, Mauricio Pochettino will be demanding a response from his squad as they crashed out of the FA Cup with a disappointing 1-0 defeat at home to Crystal Palace last Sunday.

Fiorentina on the other hand arrive in the capital in excellent form and stretched their unbeaten record to seven matches with a 3-2 win at Atalanta on Sunday so the Serie A club will be quietly confident of getting a positive result.

Spurs will have to make do without top scorer Harry Kane as he’s been ruled out of the game with a broken nose that he suffered against Palace at the weekend.

Mousa Dembele has also been ruled out with a groin injury that could keep him out for up to two weeks so the midfielder is in danger of missing next weeks North London derby.

Hugo Lloris will return to the side after missing the last two games with a shoulder injury while Erik Lamela is back in contention following a bout of illness.

However, Jan Vertonghen, Tom Carroll and Clinton N’Jie all remain on the sidelines. 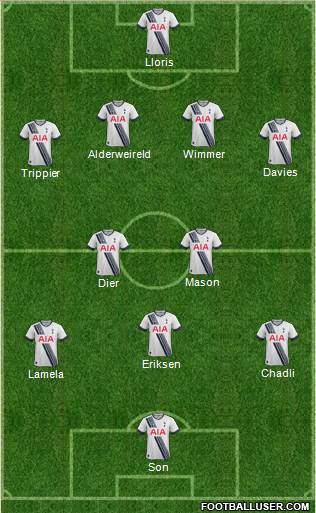 Tottenham 2-1 Fiorentina: Spurs have been in great form of late and Pochettino will be hoping the Palace defeat was just a blip. Fiorentina are a decent side and will cause some problems but I can see Tottenham winning this 2-1 tonight.

Tottenham are the 19/20 favourties with the bookmakers but Football-Talk can get you enhanced odds of 5/1 on a Spurs win – just click here to take advantage of these incredible odds. My prediction of 2-1 is on offer at 15/2 while I also like the look of Nacer Chadli opening the scoring at odds of 5/1. If you combined those two bets in a score-cast then we get very tempting odds of 25/1.