Man Utd take on Midtjylland in the Europa League tonight. Here’s a preview with team news, likely line-up, betting tips and predicted score for the game

Manchester United take on FC Midtjylland in the second leg of their Europa League last-32 tie at Old Trafford tonight.

The Red Devils slumped to a hugely disappointing 2-1 defeat in Denmark last Thursday night but they’ll be confident of turning things around on home soil this evening.

A 1-0 win or any victory by two clear goals will be enough to see United progress to the last-16 phase of the competition, which should be more than achievable against the Danish minnows.

Louis van Gaal saw his side bounce back with an impressive 3-0 FA Cup victory at Shrewsbury Town on Monday night so he’ll be looking for a repeat performance tonight in order to ease the mounting pressure on his shoulders.

United will once again be without David De Gea as the goalkeeper has failed to recover from the knee injury that he picked up during the warm up before last weeks first leg.

Chris Smalling is also a doubt after sustaining a knock colliding with an advertising hoarding at Shrewsbury but the defender is expected to be passed fit to start at the back.

Marcos Rojo is back in full training and will be on the bench tonight but Cameron Borthwick-Jackson is a major doubt after picking up a knock last time out while Adnan Januzaj is cup-tied.

Antonio Valencia is back in light training but this game will come too soon so he remains on the sidelines along with Wayne Rooney, Marouane Fellaini, Matteo Darmian, Phil Jones, Luke Shaw, Ashley Young and Bastian Schweinsteiger. 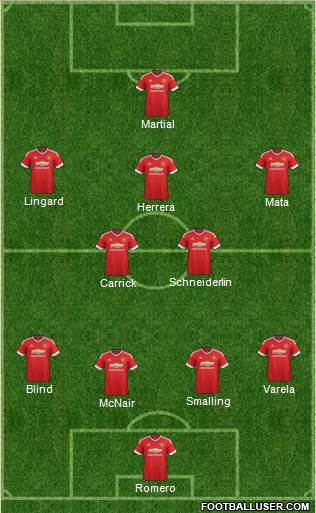 Man Utd 3-0 Midtylland: The Red Devils were embarrassing in the first leg but van Gaal got a response against Shrewsbury so he’ll be hoping for more of the same tonight. Midtjylland put in an excellent shift last week but it will be a tall order to repeat that performance at Old Trafford so I can see United easing to a 3-0 win to book their place in the last 16.

United are the 1/4 favourites to win the game but Football-Talk can get you enhanced odds of 3/1 on a United win – just click here to take advantage of these crazy odds. My prediction of 3-0 is on offer at 13/2 while I also like the look of Martial to open the scoring at 16/5. If you combined those two bets in a score-cast then we get very tempting odds of 14/1.