Chelsea take on Southampton at St Marys Stadium on Saturday afternoon. Here is the side we think Guus Hiddink will select for the game:

Chelsea take on Southampton at St Marys on Saturday afternoon. Here is the side we think Guus Hiddink will select for the game:

Defence: Hiddink will hand a late fitness test to John Terry but the skipper could make his comeback after returning to full training this week following a hamstring injury.

If Terry does return, then Branislav Ivanovic should move across to right-back with Cesar Azpilicueta reverting to left-back and Baba Rahman dropping out. Kurt Zouma is out for the season with a knee injury so Gary Cahill will continue at the back.

Midfield: John Obi Mikel has become a firm favourite under Hiddink so the Nigerian international should keep his place ahead of Nemanja Matic in midfield with Cesc Fabregas expected to once again start in the middle of the park.

Attack: Oscar could get a recall with Pedro Rodriguez dropping to the bench but I expect Willian and Eden Hazard to keep their places in attack after impressing during last weeks 5-1 thrashing of Manchester City in the FA Cup.

Alexandre Pato could be included in the squad for the first time after getting another full weeks training under his belt but Diego Costa will once again lead the line up front. 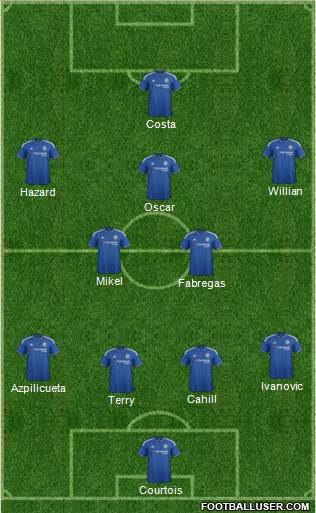