Man Utd will look to give their top four hopes a boost when they take on Arsenal at Old Trafford on Sunday. Here is the side I think van Gaal will pick:

Manchester United will look to give their top four hopes a boost when they take on Arsenal at Old Trafford on Sunday afternoon. Here is the side I think van Gaal will pick:

Goalkeeper: David de Gea has missed the last three games with a knee injury and remains a doubt for this game but van Gaal will give his number one every opportunity to prove his fitness and I have a feeling the Spaniard will return in goal.

Defence: van Gaal’s problems in defence eased slightly with the return to fitness of Marcos Rojo last night and the Argentinean could start at left-back with Cameron Borthwick-Jackson likely to miss out again.

Chris Smalling missed the win over Midtjylland with a minor injury which he sustained against Shrewsbury on Monday night but the centre-back is expected to return to the back four on Sunday.

Midfield: Michael Carrick played in defence on Thursday night but should move back in to midfield if Smalling is passed fit. Marouane Fellaini and Bastian Schweinsteiger remain out through injury so I’d expect Morgan Schneiderlin to retain his place against the Gunners.

Attack: Wayne Rooney remains out with a knee injury while Anthony Martial is a major doubt after suffering a hamstring injury during the warm up last night so Marcus Rashford could make his Premier League debut after scoring a brace against Midtjylland.

Juan Mata, Jesse Lingard and Memphis Depay could all keep their places in attack. 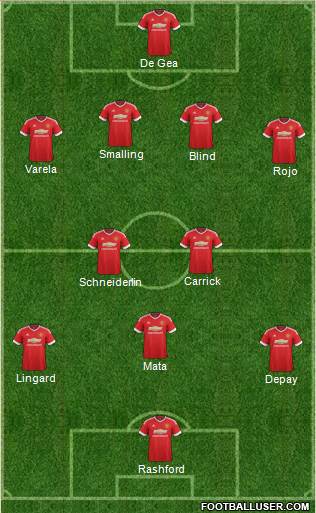