Liverpool will be out to avenge their Capital One Cup final defeat when they take on Man City at Anfield. Here is the side I think Jurgen Klopp will pick.

Liverpool will be out to avenge their Capital One Cup final defeat when they take on Man City at Anfield on Wednesday night. Here is the side I think Jurgen Klopp will pick.

Goalkeeper: Number one goalkeeper Simon Mignolet is expected to keep his place in goal.

Defence: Klopp will be forced in to at least one change at the back as Lucas Leiva has been ruled out with a muscle injury that he suffered while taking a penalty on Sunday so Kolo Toure is set for a recall.

Mamdou Sakho is also a major doubt after being forced off with suspected concussion at the weekend following a clash of heads with Emre Can so Dejan Lovren could come back in after recovering from injury.

Alberto Moreno and Nathaniel Clyne should keep their places in the full-back slots while Martin Skrtel could also be back in the squad after recovering from a hamstring injury.

Midfield: Joe Allen is also back in training after recovering from a hamstring injury and will be in Klopp’s thoughts if he wants to mix things up in midfield. However, the German coach has confirmed he’ll resist the temptation to make too many changes so I expect to see James Milner, Jordan Henderson and Emre Can lining-up in the middle of the park once again.

Attack: Daniel Sturridge is expected to get a breather though after suffering from cramps on Sunday so Roberto Firmino could revert to a striking role with Adam Lallana coming in to join Philippe Coutinho in attack. Divock Origi or the out-of-favour Christian Benteke are other forward options for Klopp. 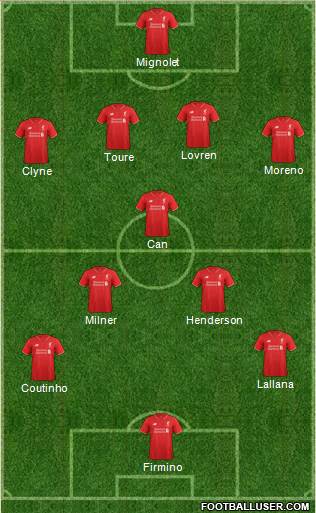