Liverpool are ready to hijack Manchester United’s attempts to sign out-of-contract Valencia winger Sofiane Feghouli this summer, according to the Express.

With the winter transfer window closed, manager’s are now looking ahead towards the summer and planning deals for next season. Today, Liverpool are ready to move for Man Utd target Sofiane Feghouli…. 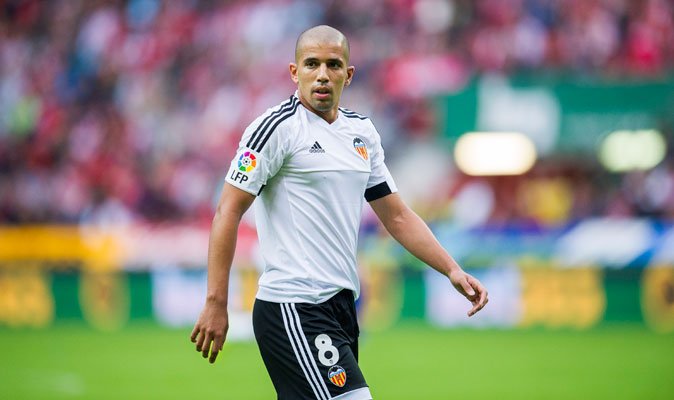 Liverpool are ready to hijack Manchester United’s attempts to sign out-of-contract Valencia winger Sofiane Feghouli this summer, according to the Express.

Feghouli joined Valencia from Grenoble in 2010 and after a short stint on loan with Almeria in 2011, the attacker has become a key part of the starting eleven at the Mestalla.

The 26-year-old has scored five goals and provided four assists in his 26 appearances so far this season for a struggling Valencia side while he also has 35 caps for the Algerian national team to his name.

The winger’s current contract with Valencia runs out in June and he’s so far refused to commit himself to a new deal leading to strong interest from a number of top European clubs.

His potential has reportedly caught the eye of Manchester United with the Express stating last month that the Red Devils are ‘pulling out all the stops’ to sign Feghouli on a free transfer this summer.

However, it appears United are now going to face some stiff competition for his signature as the newspaper is now claiming that Liverpool are ready to hijack their rivals attempts with Jurgen Klopp seemingly keen on luring Feghouli to Anfield.

The German coach has already started planning for next season having snapped up centre-back Joel Matip on a free transfer and it looks like the Reds boss is trying to get a similar agreement reached for Feghouli’s signature.

Liverpool have endured an inconsistent season but Klopp is expected to overhaul the squad this summer in order to really put his own stamp down having arrived in mid-season and attack is just one area the former Borussia Dortmund boss is set to strengthen.

Feghouli would be a solid acquisition but I wouldn’t rule United out of the running as they too need to add to their attacking options after a frustrating campaign at Old Trafford, with Louis van Gaal forced to hand debuts to several academy graduates due to a lengthy injury list.

We’ll have to see how things play out over the coming weeks but it looks as though these two British heavy-weights are ready to go head-to-head over Feghouli’s signature this summer.