Alexis Sanchez struck to rescue a point for 10-man Arsenal during a thoroughly entertaining 2-2 draw with Tottenham this afternoon. Here are player ratings: 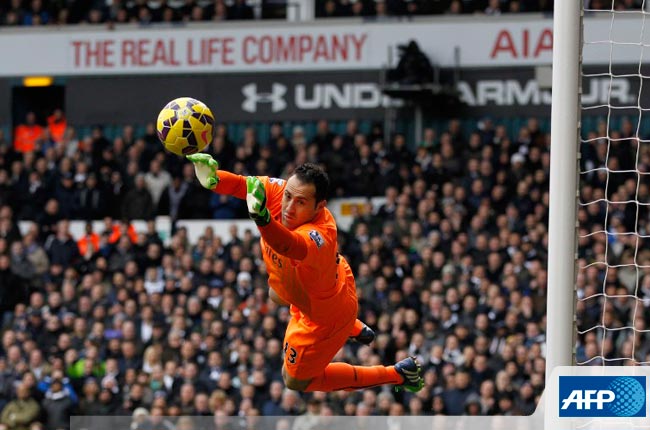 Alexis Sanchez struck late on to rescue a point for 10-man Arsenal during a thoroughly entertaining 2-2 draw with Tottenham at White Hart Lane this afternoon.

We opened the scoring shortly before half-time thanks to a lovely flick from Aaron Ramsey before the game turned on it’s head following Francis Coquelin’s sending off shortly after the break, with Spurs levelling things up through Toby Alderweireld before Harry Kane made it 2-1 with a screamer.

However, Arsenal showed great character to get back in the game and rescued a point thanks to a late strike from Sanchez.

Ospina  8/10 | In for the injured Cech and proved his worth with an excellent display. Vital save to deny Lamela at 0-0 and produced two superb saves in the second half.

Bellerin  7/10 | Did well to cover Mertesacker on a number of occasions and set up both goals.

Mertesacker  6/10 | His lack of pace was exposed a few times but his height was important too as he won plenty of aerial battles.

Gabriel  6.5/10 | Did well on his first appearance at White Hart Lane. Looks more comfortable alongside Mertesacker.

Gibbs  6.5/10 | Stepped in for Monreal who was out with a calf injury and didn’t put a foot wrong.

Coquelin  4/10 | Showed a complete lack of discipline to get sent off for a needless second booking.

Ramsey  7/10 | Lovely improvised finish to open the scoring but his all-round game was still lacking at times.

Ozil  6/10 | Struggled to get himself in the game on a consistent basis but improved in the second half when it was more open.

Sanchez  7/10 | Back among the goals with a vital strike to earn a point. Worked hard as ever.

Welbeck  7/10 | Gave Tottenham’s defence plenty of problems with his runs and played his part in the opener.

It was an excellent point considering we were 2-1 down and a man down after 65 minutes but you can’t help but think what might have been if Coquelin wasn’t sent off. Now we’ll have to wait and see if Leicester slip up at Watford this evening…