An Arsenal player has been named in the WhoScored Premier League Team of the Week alongside three Manchester City stars. See the full team here

Arsenal defender Hector Bellerin has been named in the WhoScored Premier League Team of the Week alongside three Manchester City stars.

Bellerin has been one of Arsenal’s most consistent performers this season and the Spaniard once again started during the Gunners’ 2-2 draw with Tottenham Hotspur on Saturday afternoon.

The 20-year-old played a vital role as he picked up two assists to help 10-man Arsenal leave White Hart Lane with a hard earned point and the full-back makes the Team of the Week thanks to his score of 8.34.

However, the team is dominated by Manchester City and West Ham players with each club having three stars named in the side after impressive victories this past weekend.

City got their league campaign back on track with a resounding 4-0 victory over Aston Villa on Saturday and Gael Clichy, David Silva and Sergio Aguero all make the TOTW after putting in excellent displays at the Etihad.

West Ham pulled off perhaps the best result of the weekend after coming from two goals down with 15 minutes remaining to beat Everton 3-2 at Goodison Park and Adrian, Michail Antonio and Dimitri Payet have all earned places in the Team of the Week. 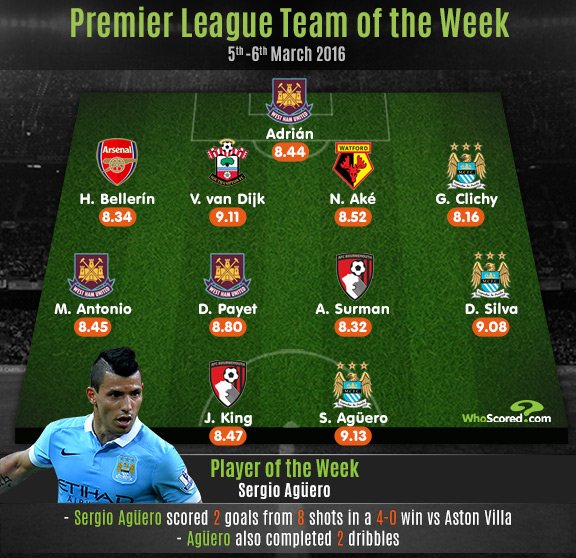