Arsenal take on Hull City in the FA Cup at the KC Stadium on Tuesday night. Here is the side Gooner Mac thinks Arsene Wenger will select for the game:

Arsenal will be looking to book their place in the quarter finals of the FA Cup when they take on Hull City at the KC Stadium on Tuesday night. Here is the side Gooner Mac thinks Arsene Wenger will select for the game:

Goalkeeper: Petr Cech has been ruled out for a month after suffering a calf injury so David Ospina will continue in goal and look to build on an impressive performance against Spurs on Saturday.

Defence: Laurent Koscielny has also been ruled out with his own calf injury so Gabriel is set to continue at the back but I think we might see Calum Chambers come in with Per Mertesacker given a rest.  Hector Bellerin is likely to continue at right-back with Kieran Gibbs keeping his place at left-back as Nacho Monreal is carrying a minor calf injury and shouldn’t be risked.

Midfield: Mohamed Elneny put in another very encouraging display against Spurs and I think we’ll see him retain his place while Mathieu Flamini should get a recall in place of Francis Coquelin, who’s suspended following his dismissal in the North London Derby.

Attack: I think we’ll see plenty of changes in attack as Aaron Ramsey, Mesut Ozil, Alexis Sanchez and Danny Welbeck are expected to be given a breather with Olivier Giroud, Theo Walcott and Joel Campbell all set for recalls after being substitutes at the weekend.

Wenger has confirmed Alex Iwobiis set to come back in to the squad and the youngster will be hoping to get another chance to impress after starting in the original tie against Hull last month. 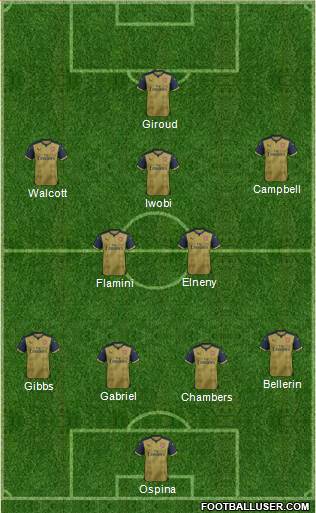