Arsenal entertain Watford at the Emirates on Saturday afternoon. Here is the side Gooner Mac thinks Arsene Wenger will select for the game:

Arsenal will be looking to keep pace with the top two when we entertain Watford at the Emirates on Saturday afternoon. Here is the side Gooner Mac thinks Arsene Wenger will select for the game:

Goalkeeper: Petr Cech is back in full training after recovering from a calf injury but Ospina remains on stand-by as the Czech international will still face a late fitness test to see if he’s ready for match action.

Defence: I think Wenger may recall Per Mertesacker for this game with the German giant starting alongside Laurent Koscielny at the back and Gabriel dropping to the bench.

Hector Bellerin will almost certainly keep his place at right-back while Nacho Monreal should retain his place at left-back ahead of Kieran Gibbs.

Midfield: Aaron Ramsey is due to make his comeback from a thigh injury next weekend but the Watford game will come too soon so he remains on the sidelines. Jack Wilshere and Tomas Rosicky are both back in full training but they lack match fitness so won’t be considered for selection just yet.

Therefore, with Santi Cazorla and Alex Oxlade-Chamberlain still weeks away from recovering from their injuries, I think we’ll see the impressive Mhamed Elneny continue alongside Francis Coquelin this weekend.

Attack: Alex Iwobi put in a MOTM goal-scoring performance against Everton before the international break so I think it will be hard for Wenger to leave him out of the starting eleven on Saturday afternoon.

I expect the Nigerian international to keep his place in attack alongside Mesut Ozil and Alexis Sanchez with the likes of Theo Walcott and Joel Campbell once again among the substitutes.

Danny Welbeck is likely to start up front ahead of Olivier Giroud after getting himself on the score-sheet during our 2-0 win at Everton two weeks ago. 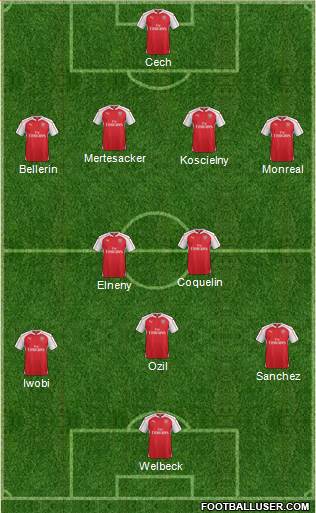