Chelsea take on relegation-threatened Aston Villa at Villa Park on Saturday afternoon. Here is the side we think Guus Hiddink will select for the game:

Chelsea take on relegation-threatened Aston Villa at Villa Park on Saturday afternoon. Here is the side we think Guus Hiddink will select for the game:

Defence: Kurt Zouma is Chelsea’s only injury concern in defence so Gary Cahill is set to continue alongside skipper John Terry at the heart of the back four. Branislav Ivanovic will continue at right-back with Cesar Azpilicueta expected to be selected ahead of Baba Rahman at left-back.

Midfield: I think Hiddink might give John Obi Mikel a breather with Nemanja Matic coming back in to the side to start along with Spanish international Cesc Fabregas in the middle of the park.

Attack: Diego Costa is a doubt after missing the last two games with a hip injury that he aggravated during Chelsea’s Champions League defeat to Paris Saint-Germain earlier this month. The Spaniard has a chance to return but if he misses out then Loic Remy or Bertrand Traore could lead the line up front.

Eden Hazard is set to once again miss out with a hip problem that;s hampered him in recent weeks so Pedro could come in for Kenedy on the wing and join Oscar and Willian in attack this weekend. 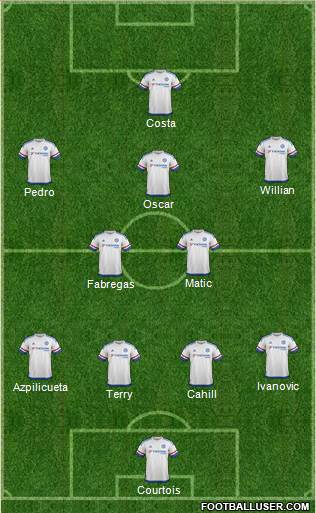