Arsenal take on Watford at the Emirates on Saturday afternoon. Here’s a preview with team news, likely line-ups, betting tips and predicted score for the game

Arsenal will be looking to close the gap on the top two when we entertain Watford at the Emirates on Saturday afternoon.

We kept in touch with leaders Leicester City thanks to an impressive 2-0 victory over Everton before the international break with goals from Danny Welbeck and Alex Iwobi ensuring we left Goodison Park with all three points.

That win meant we remained 11 points adrift of the league leaders with a game in hand but with the Foxes facing a tough game against Southampton on Sunday, it’s vital we beat Watford tomorrow to cut their advantage.

A poor run of form since the turn of the year has left us in this situation and while the title is a long way off at present, we also have to look over our shoulders as West Ham and Manchester United are now just five points adrift, so a top four finish is far from guaranteed.

Therefore, Arsene Wenger will no doubt be demanding focus from his players this weekend, which is something we severely lacked in the FA Cup tie last month as the Hornets progress to the last four thanks to a 2-1 win at the Emirates.

We’ve been handed a major boost with Petr Cech returning to training today after recovering from a calf injury and the Czech international is set to return between the sticks tomorrow.

Jack Wilshere also resumed full training this week as the midfielder looks to finally make his first appearance of the season having struggled to overcome a fractured fibula that he sustained in pre-season. However, the 24-year-old is going to need at least two weeks to work on his match fitness before he’ll be available for selection.

Tomas Rosicky is also lacking match practice after recovering from a thigh problem while Santi Cazorla and Alex Oxlade-Chamberlain aren’t expected back until later on this month.

Aaron Ramsey is close to making his return from a thigh injury but this game will come too soon so the Welshman won’t be available until next weeks trip to West Ham.

Watford have no fresh injury worries to contend with but defender Joel Ekstrand is unlikely to feature having only recently returned from a serious knee injury. 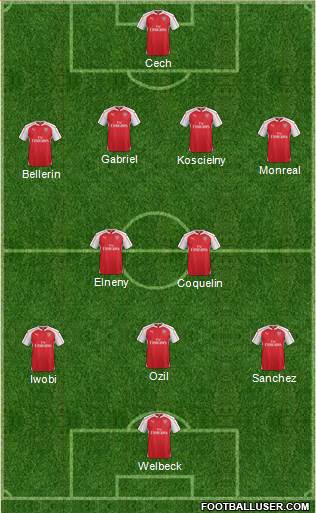 Arsenal 2-0 Watford: The visitors are safe in mid-table so don’t have much left to play for in the league and their focus will surely be on the FA Cup semi-final with Crystal Palace. Many have written off our title chances but I still think there is a glimmer of hope and can see us easing to a much-needed win tomorrow to keep those hopes alive.

Arsenal are the 4/11 favourites to win the game but Football-Talk can get you enhanced odds of 3/1 on a home win – just click here to take advantage of these crazy odds. My prediction of 2-0 is on offer at 6/1 while I also like the look of Danny Welbeck to open the scoring at 10/3. If we combined those two bets in a score-cast then we get very tempting odds of 14/1.