Players from Arsenal, Chelsea, Liverpool, Tottenham and Leicester City have all made it in to the WhoScored? Premier League Team of the Week.

Players from Arsenal, Chelsea, Liverpool, Tottenham, Manchester City and Leicester City have all made it in to the WhoScored? Premier League Team of the Week.

The Gunners retained their slim hopes of winning the title this year after thrashing Watford 4-0 at the Emirates on Saturday afternoon and two of Arsene Wenger’s men have made it in to the TOTW.

Hector Bellerin was among the goals at the weekend and his deflected strike helped the Spaniard become this weeks highest scoring defender with a rating of 8.52 while Laurent Koscielny also makes the line-up after marshalling Arsenal to another clean sheet.

The other two defenders come from run-away league leaders Leicester City with Wes Morgan and Christian Fuchs making the Team of the Week after helping the Foxes secure a vital 1-0 win over Southampton yesterday.

Chelsea put in an excellent performance at Aston Villa on Saturday with Pedro netting twice during a 4-0 win at Villa Park and the attacker is this weeks highest scoring player with a score of 9.01.

Liverpool and Tottenham played out a 1-1 draw on Sunday and Philippe Coutinho makes the TOTW with a score of 8.89 while Spurs midfielder Mousa Dembele also earned his place in the line-up thanks to a rating of 8.80.

Manchester City cemented their place in the top four with a resounding 4-0 victory at Bournemouth and star striker Sergio earned a rating of 8.75 after scoring the third of City’s goals at Dean Court, which was enough to see him named in the TOTW.

Check out the full line-up below. 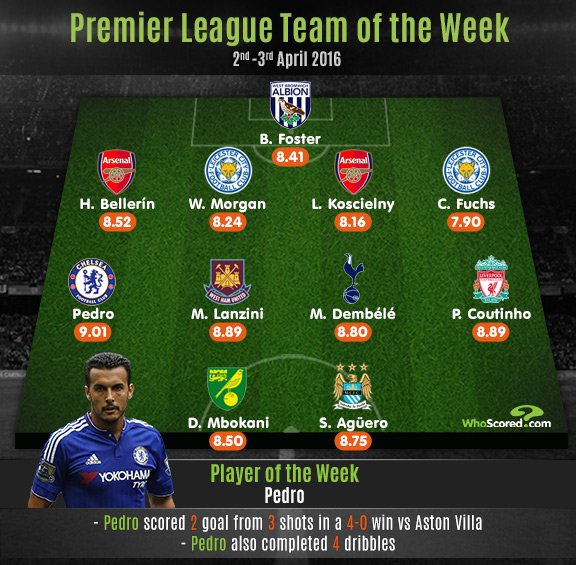