Title-chasing Tottenham Hotspur take on Manchester United on Sunday afternoon. Here is the side we think Mauricio Pochettino will select for the game:

Tottenham will look to keep pace with leaders Leicester City when they take on Manchester United on Sunday afternoon.  Here is the side we think Mauricio Pochettino will select for the game:

Defence: Jan Vertonghen could finally make his long-awaited return to the squad after recovering from a knee ligament injury that he suffered back in February. The Belgian will undergo a late fitness test, however, I don’t expect Pochettino to make any changes to the back four that started during last weekend’s 1-1 draw with Liverpool at Anfield.

Kevin Wimmer has struck up an excellent partnership with Toby Alderweireld over the past 15 games and with Vertonghen lacking in match practice, I think we’ll see the Spurs boss stick with the Austrian this weekend while Danny Rose and Kyle Walker should retain their places in the full-back spots.

Midfield: Tottenham have no fresh injury worries in midfield so Eric Dier is set to once again start alongside Mousa Dembele in the middle of the park. Nabil Bentaleb remains out with a long-term knee injury.

Attack: Tottenham have been handed a boost with Erik Lamela passed fit to return after missing the Liverpool game with a minor calf injury that he suffered on international duty. The Argentinean is expected to come in for Heung-min Son with Deli Alli and Christian Eriksen keeping their places in attack behind top scorer Harry Kane. 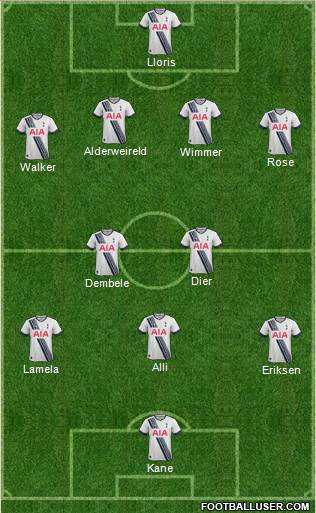