Liverpool get back to Premier League action when they entertain Stoke City at Anfield on Sunday afternoon. Here is the side I think Jurgen Klopp will pick.

Liverpool get back to Premier League action when they entertain Stoke City at Anfield on Sunday afternoon. Here is the side I think Jurgen Klopp will pick.

Defence: Klopp could decide to give Nathaniel Clyne a breather ahead of their second leg with Borussia Dortmund with Jon Flanagan coming in as he’s ineligible to play in the Europa League.

There could be a temptation to give Martin Skrtel a run-out but I think Klopp will stick with Dejan Lovren alongside Mamadou Sakho while Alberto Moreno should keep his place at left-back.

Midfield: Liverpool are certain to make changes in midfield as Jordan Henderson has been ruled out for the rest of the season with a knee injury that he suffered against Dortmund last night while Emre Can is suspended.

Lucas Leiva remains a doubt due to a thigh injury so Joe Allen is expected to come in to the starting eleven alongside James Milner in the middle of the park.

Attack: There are also likely to be changes in attack with Roberto Firmino coming back in having made his return from a hamstring injury with a run-out from the bench last night. Philippe Coutinho could get a rest while Jordon Ibe may get a rare start in attack alongside Adam Lallana.

Daniel Sturridge is likely to come in up front after being left out of the crucial game with Dortmund, with goal scorer Divock Origi given a breather after putting in a tireless performance in Germany. 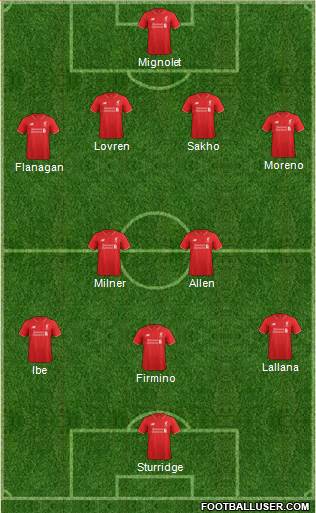