Players from Arsenal, Liverpool and Tottenham have all been named in the WhoScored Team of the Week after another pulsating weekend of Premier League action.

Players from Arsenal, Liverpool, Tottenham and Leicester City have all been named in the WhoScored Team of the Week after another pulsating weekend of Premier League action.

The Gunners kicked things off with a thrilling 3-3 draw at West Ham on Saturday with youngster Alex Iwobi once again impressing for the North Londoners and his score of 8.46 was enough to see him join Hammers striker Andy Carroll in the Team of the Week after the Geordie hitman netted a hat-trick at Upton Park.

Liverpool warmed up for their huge Europa League clash against Borussia Dortmund with a comfortable 4-1 victory over Stoke yesterday and full-back Alberto Moreno has made the TOTW after his goal-scoring performance earned him a rating of 8.04.

Tottenham maintained their title challenge with a resounding 3-0 win over Man Utd on Sunday afternoon with goal-scorers Toby Alderweireld [8.69] and Erik Lamela [9.38] both doing enough to book their places in this weeks line-up.

However, Spurs remain seven points adrift of leaders Leicester City after they produced another magnificent display to beat Sunderland 2-0 with N’Golo Kante joining Jamie Vardy in the Team of the Week after the striker scored both goals at the Stadium of Light. 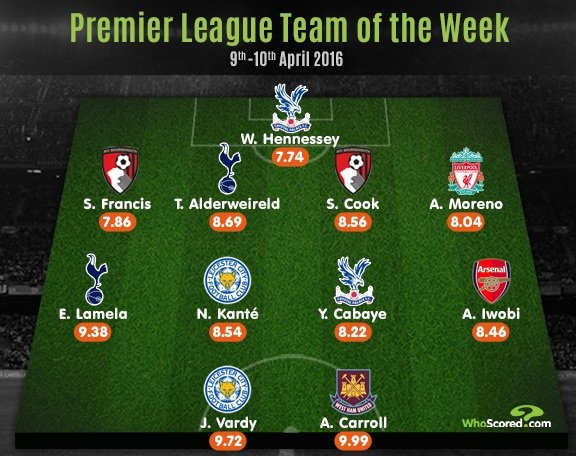