Liverpool will be looking to book their place in the semi finals of the Europa League when they take on Borussia Dortmund tomorrow. Here is our predicted XI

Liverpool will be looking to book their place in the semi finals of the Europa League when they take on Borussia Dortmund at Anfield on Thursday night. Here is the side I think Jurgen Klopp will pick.

Defence: Klopp is expected to recall Mamadou Sakho and Dejan Lovren after resting the duo for Sunday’s win over Stoke City meaning Kolo Toure and Martin Skrtel will drop out. Jon Flanagan is ineligible for European games so Nathaniel Clyne and Alberto Moreno are set to fill the full-back spots once again.

Midfield: Liverpool are set to make changes in midfield as well with Emre Can almost certain to get a recall after being suspended at the weekend. Jordan Henderson has been ruled out for the rest of the season with a knee injury that he suffered against Dortmund last week so Joe Allen is expected to play in a three-man midfield alongside James Milner.

Attack: There are also likely to be changes in attack with Roberto Firmino set to drop out as he’s still not 100% match sharp after recently recovering from injury while Sheyi Ojo will also miss out despite his impressive showing against Stoke.

Philippe Coutinho and Adam Lallana will get recalls to the side but it’s going to be interesting to see who Klopp opts for up front. Daniel Sturridge was back among the goals at the weekend but Divock Origi came off the bench to score two himself and the Belgian was preferred for the first leg in Germany last week.

Therefore, I think we’ll see Klopp go with Origi once again tomorrow night as the youngster brings a high work rate and his pace will also be relied upon to cause Dortmund some problems, just as it did at the Westfalenstadion. 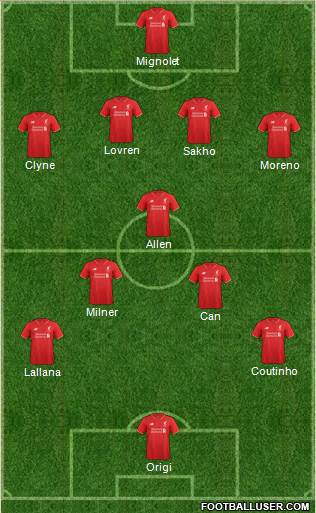