Man Utd will be looking to close in on the top four when they take on Aston Villa at Old Trafford on Saturday. Here is the side I think van Gaal will pick:

Manchester United will be looking to close in on the top four when they take on Aston Villa at Old Trafford on Saturday afternoon. Here is the side I think van Gaal will pick:

Goalkeeper: David de Gea is certain to keep his place in goal after another excellent display against West Ham.

Defence: van Gaal is likely to recall Matteo Darmian to the starting eleven with youngster Timothy Fosu-Mensah given a breather but the rest of the back four should remain unchanged with Chris Smalling, Daley Blind and Marcos Rojo all retaining their places.

Midfield: Marouane Fellaini proved to be the match-winner against the Hammers last night so the Belgian international may have played his way back in to van Gaal’s side but we could see Morgan Schneiderlin come back in with Michael Carrick given a rest against Villa. Bastian Schweinsteiger is likely to miss the rest of the season with a knee injury.

Attack: Wayne Rooney made his first team comeback with a substitute appearances at Upton Park and the skipper could now get a recall to the starting eleven with Ander Herrera the man most likely to drop out.

Marcus Rashford should retain his place after scoring a stunner against West Ham while Anthony Martial should also keep his place in attack. Juan Mata may get a recall after being an unused substitute last night with Jesse Lingard dropping out. 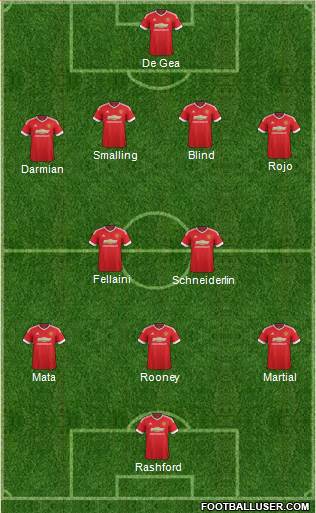