Man Utd will be looking to close in on the top four when they take on Crystal Palace at Old Trafford on Wednesday. Here is the side I think van Gaal will pick:

Manchester United will be looking to close in on the top four when they take on Crystal Palace at Old Trafford on Wednesday evening. Here is the side I think van Gaal will pick:

Defence: van Gaal is likely to recall Timothy Fosu-Mensah after giving the youngster a breather against Aston Villa but the rest of the back four should remain unchanged with Chris Smalling, Daley Blind and Marcos Rojo all retaining their places.

Midfield: Michael Carrick should also come back in to the side after being rested at the weekend with Marouane Fellaini possibly the man to drop out as Morgan Schneiderlin should retain his place in the middle of the park. Bastian Schweinsteiger is likely to miss the rest of the season with a knee injury.

Attack: Wayne Rooney made a successful comeback against Villa following two months on the sidelines and the skipper should be fine to start again tomorrow night while van Gaal has confirmed that Marcus Rashford will once again lead the line up front after scoring the winner on Saturday.

Anthony Martial and Jesse Lingard should get recalls to the starting eleven after being named on the bench against Villa with Memphis Depay and Juan Mata dropping out. 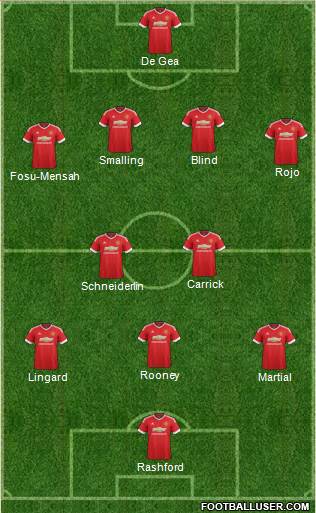