Manchester United and Liverpool have dominated the latest WhoScored Premier League Team of the Week with seven players coming from the two North-West rivals.

Manchester United and Liverpool have dominated the latest WhoScored Premier League Team of the Week with seven players coming from the two North-West rivals.

It was a limited mid-week fixture list but there were still five games to choose from and United continued their push for the top four with a comfortable 2-0 victory over Crystal Palace on Wednesday night.

Three of Louis van Gaal’s defenders have made the cut with Antonio Valencia putting in another solid display at right-back to earn a rating of 7.82 while Daley Blind’s 7.57 was also enough to see him make the TOTW. Matteo Darmian was the final United representative as the Italian scored a superb goal to secure the win and a rating of 8.37.

Liverpool continued to improve under Jurgen Klopp as they thrashed Mersey rivals Everton 4-0 at Anfield and unsurprisingly James Milner has made the Team of the Week after grabbing two assists in an excellent display that earned him a rating of 9.70.

Mamadou Sakho got himself on the score-sheet and has been joined in the TOTW by fellow goal-scorers Philippe Coutinho [9.28] and Divock Origi [8.16] to make it four Liverpool players in the line-up.

Arsenal’s Alexis Sanchez also makes the cut after scoring both goals during a 2-0 win over West Brom last night while West Ham duo Andy Carroll and Mark Noble are also included after scoring during the Hammers 3-1 win over Watford. 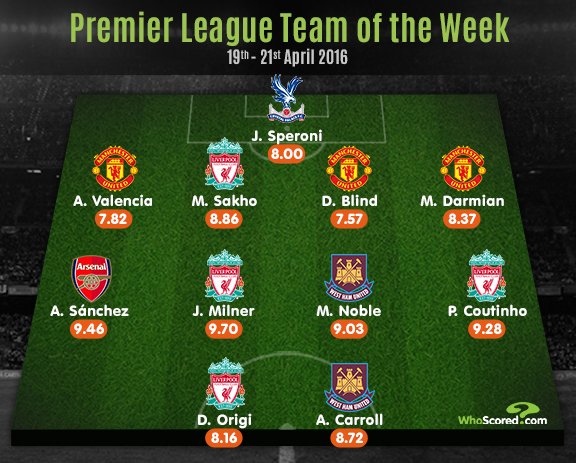