Tottenham will look to close the gap on Leicester when they take on WBA this evening. Here is the side we think Mauricio Pochettino will select for the game:

Tottenham will look to close the gap on leaders Leicester City when they take on West Brom at White Hart Lane this evening.  Here is the side we think Mauricio Pochettino will select for the game:

Defence: Jan Vertonghen has made a successful return to action following two months on the sidelines with a knee injury so the Belgian international is expected to once again line-up alongside compatriot Toby Alderweireld tonight with Kevin Wimmer on the bench.

Pochettino is unlikely to make any changes to his back four meaning Danny Rose and Kyle Walker should retain their places in the full-back spots.

Midfield: With no fresh injury concerns to deal with, Spurs are expected to line-up as they did for last weeks impressive 4-0 demolition of Stoke City with Mousa Dembele partnering Eric Dier in midfield. Dele Alli, who was announced as the PFA Young Player of the Year last night, will continue in the advanced midfield role.

Attack: Erik Lamela is expected to keep his place in attack after another excellent outing at the Britannia last week so he’ll continue in attack along with Christian Eriksen. Harry Kane will be hoping to add to his tally of 24 goals and go another step closer to winning the golden boot.

Here is how I think we’ll see Spurs line-up 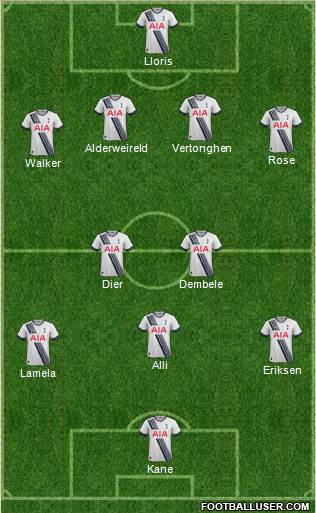