Arsenal and Chelsea players have made it in to the WhoScored Premier League Team of the Week. See the line-up and who made the cut here.

Arsenal and Chelsea players have made it in to the WhoScored Premier League Team of the Week but once again it’s Leicester City who dominate with three representatives.

The Gunners saw their top four hopes dented after being held to a disappointing 0-0 draw at Sunderland on Sunday afternoon with goalkeeper Petr Cech making several solid saves to keep the hosts from taking all three points.

The Czech international’s performance has earned him a WhoScored rating of 7.63, which was the best by any keeper in the league this weekend therefore seeing him named in the Team of the Week.

Chelsea produced an excellent performance to beat Bournemouth 4-1 on Saturday afternoon with Eden Hazard netting a twice to earn a score of 9.54 which sees him named in the TOTW, and Hazard is joined by team mate Cesc Fabregas after the Spaniard picked up a hat-trick of assists to secure a score of 8.80.

However, it was Leicester who once again stole the headlines as they took another huge step towards the Premier League title with a 4-0 victory over Swansea City on Sunday afternoon.

Defenders Robert Huth and Christian Fuchs both make the TOTW while PFA Player of the Year, Riyah Mahrez, also makes the cut thanks to his goal-scoring exploits at the King Power. 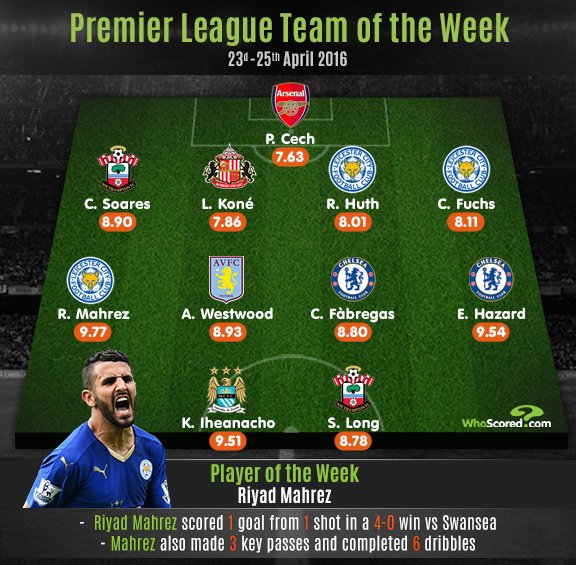