Liverpool will have one eye on their Europa League semi-final second leg when they take on Swansea on Sunday. Here is the side I think Jurgen Klopp will pick

Liverpool will have one eye on their Europa League semi-final second leg when they take on Swansea at the Liberty Stadium on Sunday afternoon. Here is the side I think Jurgen Klopp will pick for the game.

Goalkeeper: Jurgen Klopp has already confirmed he’ll make plenty of changes for the game with Danny Ward set to be given another chance to impress in goal.

Defence: Nathaniel Clyne, Dejan Lovern, Kolo Toure and Alberto Moreno should all get a rest as Klopp makes wholesale changes to his side with Connor Randall, Martin Skrtel and Brad Smith set to come in while out-of-favour centre-back Steven Caulker could also get a rare run out.

Midfield: With Emre Can and Jordan Henderson out through injury, Klopp is likely to protect the likes of Joe Allen and James Milner meaning youngsters Kevin Stewart and Cameron Brannagan should get starts. Lucas Leiva might play to offer some much-needed experience in the middle of the park.

Attack: Daniel Sturridge was surprisingly left on the bench as an unused substitute at Villarreal so he could come back in to the starting eleven with Roberto Firmino rested. Adam Lallana should also drop out with Jordan Ibe and Sheyi Ojo coming in to the attack. Philippe Coutinho has recovered from the minor illness that saw him go off at half-time last night but the Brazilian playmaker is likely to be rested against Swansea anyway. 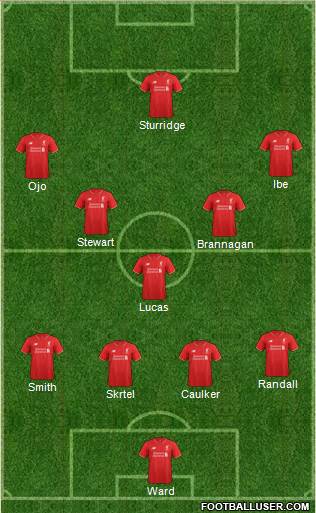