New Chelsea boss Antonio Conte is confident of signing 34-goal striker Gonzalo Higuain in a £45m deal from Napoli this summer, according to reports 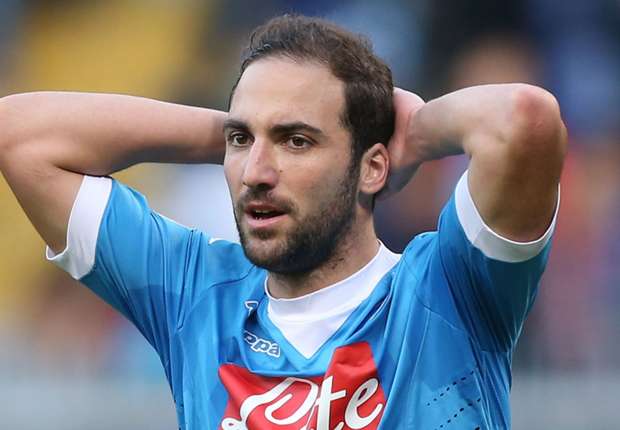 New Chelsea boss Antonio Conte is confident of signing 34-goal striker Gonzalo Higuain in a £45m deal from Napoli this summer, according to the Mirror.

Conte isn’t due to officially take charge at Stamford Bridge until he’s fulfilled his duties with the Italian national team at this summers European Championships but it looks as though he’s already planning for life in West London.

It appears the 46-year-old coach is planning to strengthen his strike-force as the Mirror claim that Conte has made Higuain his number one transfer target and believes the South American striker is ready to make the move to Chelsea.

Higuain came close to joining Arsenal in 2013 when he left Real Madrid but eventually ended up at Napoli where he’s continued to forge a reputation as one of Europe’s deadliest strikers and has netted 34 times in just 40 appearances this season alone.

The Mirror claim that Napoli may be ready to cash-in while the 28-year-old’s value is still high and Chelsea are understood to be confident of wrapping-up a £45m deal this summer after making initial enquiries over his availability.

Conte is going to have to make plenty of changes at Stamford Bridge this summer after a disastrous campaign and the West Londoners could certainly do with a goal threat like Higuain next season as Diego Costa is their top scorer with just 11 goals this term.

Higuain has hit at least 20 goals in six of his last eight seasons and has netted 223 times in his 451 career appearances, so he clearly knows where the goal is and would offer a new threat up front next season if he was to complete a move to Stamford Bridge.