Manchester United take on relegation-threatened Norwich City at Carrow Road on Saturday afternoon. Here is the side I think van Gaal will pick:

Manchester United will look to close-in on the top four when they take on relegation-threatened Norwich City at Carrow Road on Saturday afternoon. Here is the side I think van Gaal will pick:

Goalkeeper: David de Gea is certain to keep his place in goal this weekend.

Defence: van Gaal has hinted he’ll make a few changes from the side that drew 1-1 with Leicester City last week as he looks to keep his squad fresh ahead of a busy final few weeks of the season.

Timothy Fosu-Mensah could get a recall at right-back with Antonio Valencia dropping out while Matteo Darmian could come in at left-back in order to give Marcos Rojo a breather. Chris Smalling and Daley Blind should retain their place at the back.

Midfield: Marouane Fellaini will miss the final three league games of the season after being hit by a three-match ban by the FA for his part in an altercation with Robert Huth last weekend.

Michael Carrick is likely to keep his place in the middle of the park so with Bastian Schweinsteiger out with a knee injury, Morgan Schneiderlin could get a recall after being left on the bench for the last two games.

Attack: Juan Mata could also be brought back in to the starting eleven after only being named on the bench last time out with Jesse Lingard the man most likely to make way.

Wayne Rooney should continue in his deeper role behind Marcus Rashford while Anthony Martial should also keep his place in attack, but the likes of Ander Herrera, Ashley Young and Memphis Depay are all pushing for starts if van Gaal wants to change things up. 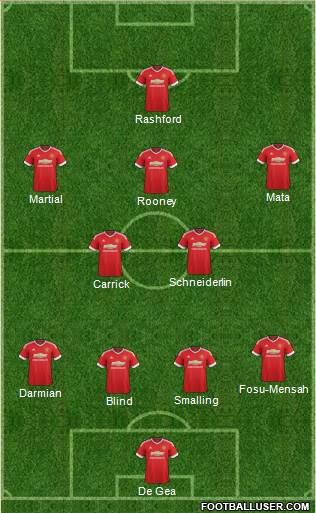