Arsenal will be looking to secure third spot in the Premier League when they take on Man City at the Etihad on Sunday afternoon. Here is our predicted team

Arsenal will be looking to secure third spot in the Premier League when they take on Manchester City at the Etihad on Sunday afternoon. Here is the side Gooner Mac thinks Arsene Wenger will select for the game:

Goalkeeper: Petr Cech is certain to keep his place in goal once again this weekend.

Defence: Per Mertesacker has been ruled out for the final two games of the season with a hamstring injury so Gabriel is set to come back in to the side and start alongside Laurent Koscielny at the back. Hector Bellerin and Nacho Monreal will retain their positions in the full-back slots.

Midfield: We’ve played very defensively on our previous two visits to the Etihad so if Wenger adopts this approach again on Sunday, then I can see him playing Francis Coquelin alongside Mohamed Elneny in midfield and moving Aaron Ramsey out to the wing.

Jack Wilshere and Santi Cazorla are back in contention but Jack’s only played 10 minutes of first team football this season while Santi only made his comeback with a run-out for the under-21’s on Tuesday night so I don’t think either will be considered ready to start just yet.

Attack: I’m not a fan of Ramsey on the wing but I have a feel that if Wenger goes defensive on Sunday, the Welshman will be pushed out wide to help counter the attacking threat of City. Mesut Ozil and Alexis Sanchez are sure to keep their places so Alex Iwobi may be the unfortunate one to drop out.

Olivier Giroud’s goalless streak stretched to 14 games against Norwich and Danny Welbeck made a huge contribution off the bench having scored the winner, so I’d be shocked if he wasn’t recalled to the starting eleven on Sunday. 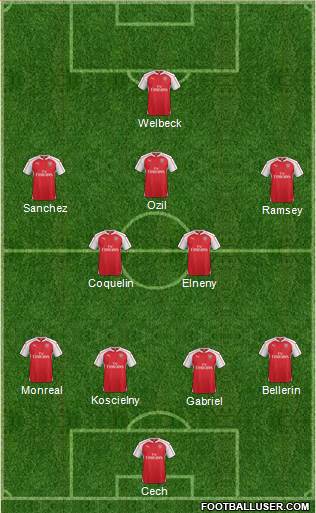