Liverpool will take Watford at Anfield on Sunday fresh from their heroics in the Europa League. Here is the side I think Jurgen Klopp will pick for the game.

Liverpool will take on Watford at Anfield on Sunday afternoon fresh from their heroics in the Europa League. Here is the side I think Jurgen Klopp will pick for the game.

Goalkeeper: Klopp has confirmed he’ll make some changes from the side that beat Villarreal on Thursday night so Danny Ward could get another chance to impress in goal.

Defence: The Reds boss could stick with the majority of the defence that played last night with Nathaniel Clyne, Alberto Moreno and Dejan Lovren all keeping their places but Martin Skrtel should come in to replace Kolo Toure at centre-back. Mamadou Sakho obviously still misses out as investigations continue in to his failed drugs test.

Midfield: Emre Can made a successful return to action last night after making a swift recovery from an ankle injury but the German international is likely to be given a breather this weekend to protect him for the Europa League final.

With Jordan Henderson still out with a knee problem, Lucas Leiva and Joe Allen could start in midfield with James Milner also given a well earned rest.

Attack: Liverpool have little left to play for in the league so Klopp is likely to rest Daniel Sturridge, Philippe Coutinho and Adam Lallana with Jordon Ibe and Sheyi Ojo favourite to come in to the attack.

Christian Benteke should also get a rare start up front while Roberto Firmino could keep his place to add some quality to the side. 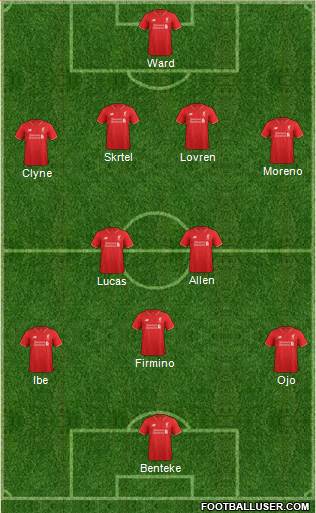