Chelsea will look to end a poor season on a high when they take on Liverpool at Anfield on Wednesday. Here is the side we think Guus Hiddink will select

Chelsea will look to end a disappointing season on a high note when they take on Liverpool at Anfield on Wednesday night. Here is the side we think Guus Hiddink will select for the game:

Goalkeeper: Thibaut Courtois should keep his place in goal ahead of Asmir Begovic after returning to the side for Saturday’s 3-2 defeat at Sunderland having served his two-match suspension.

Defence: John Terry will miss the final two games of the season and is unlikely to pull on a Chelsea again after being dismissed during the closing stages at the Stadium of Light at the weekend.

Branislav Ivanovic should move in to the middle of defence alongside Gary Cahill, Cesar Azpilicueta will switch to his more natural right-back position while Baba Rahman should come in at left-back.

Midfield: Cesc Fabregas could drop back in to a deeper role having played further forward against Sunderland. This would likely see Nemanja Matic miss out as John Obi Mikel has become a favourite under Hiddink during the second half of the season.

Attack: That could free up a place for Oscar to return to the starting eleven with the Brazilian international joining Willian and Eden Hazard in attack. Diego Costa is certain to keep his place up front with the likes Alexandre Pato and Radamel Falcao once again on the bench. 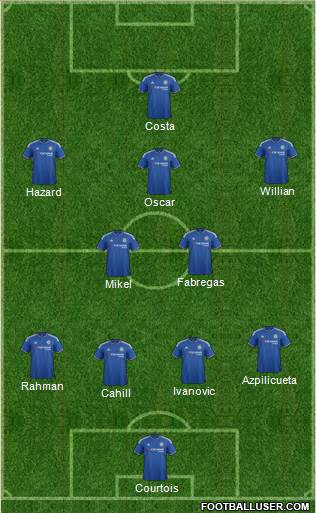