Tottenham take on Newcastle United at St James’ Park on Sunday afternoon. Here is the side we think Mauricio Pochettino will select for the game:

Tottenham will look to wrap-up second place in the Premier League table when they take on Newcastle United at St James’ Park on Sunday afternoon.  Here is the side we think Mauricio Pochettino will select for the game:

Goalkeeper: Hugo Lloris is certain to keep his place in goal despite shipping two goals during last weeks loss at home to Southampton.

Defence: Pochettino has confirmed the club have no fresh injury worries so I expect he’ll stick with his first choice back four as they look to secure a positive result that will cement second place ahead of North London rivals Arsenal.

That means Jan Vertonghen will continue alongside Toby Alderweireld at the back while first choice full-backs Danny Rose and Kyle Walker should also retain their places.

Midfield: Mousa Dembele continues to serve his six-game suspension after being charged with violent conduct by the FA after following a clash with Diego Costa so with Nabil Bentaleb still out injured, Ryan Mason should continue alongside Eric Dier in the middle of the park this weekend.

Attack: Dele Alli is also suspended and I think Pochettino might be tempted to bring Nacer Chadli in for Heung-min Son in attack despite the South Korean scoring last time out. Christian Eriksen and Erik Lamela are expected to keep their places and will continue to support Harry Kane in attack. 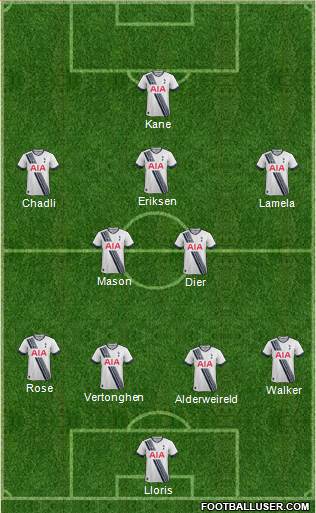