Liverpool boss Jurgen Klopp is set to field a weakened team when the Reds finish off their Premier League season at WBA on Sunday. Here is a predicted team:

Liverpool boss Jurgen Klopp is set to field a weakened team when the Reds finish off their Premier League season at West Brom on Sunday. Here is predicted team:

Goalkeeper: Danny Ward is expected to be passed fit so should come in between the sticks with Simon Mignolet rested.

Defence: Klopp is set to make wholesale changes to his side in order to rest his big-guns ahead of Wednesday night’s Europa League final with Sevilla meaning that Nathaniel Clyne, Dejan Lovren, Kolo Toure and Alberto Moreno will be rested.

Jon Flanagan could come in at right-back while Lucas Leiva and Martin Skrtel should form the centre-back pairing with Brad Smith at left-back. Obviously Mamadou Sakho isn’t available due to his drugs ban.

Midfield: There will be changes in midfield too as Emre Can and James Milner will be rested with Kevin Stewart partnering Joe Allen in the middle of the park.

Jordan Henderson is back in full training as he looks to get back to full fitness ahead of the Europa League final next week but this game will obviously come too soon.

Attack: It’s all-change in attack from the front four that started against Chelsea in midweek with Roberto Firmino, Adam Lallana, Philippe Coutinho and Daniel Sturridge given a breather.

Jordon Ibe and Sheyi Ojo should come in to the side with Christian Benteke leading the  line up front while youngster Joao Teixeira could get a run out in attack. Danny Ings could return to the squad but a place on the bench is probably the best he can hope for. 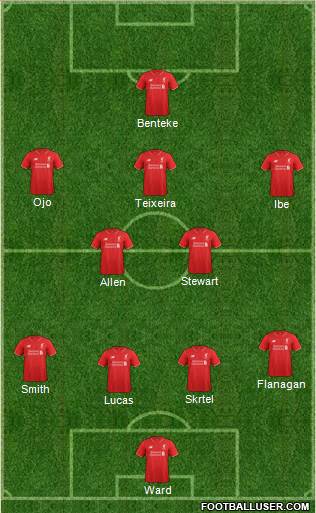