Man Utd will be hoping to steal fourth spot from Man City when they take on Bournemouth at Old Trafford on Sunday. Here is the side I think van Gaal will pick:

Manchester United will be hoping to steal fourth spot from Manchester City when they take on Bournemouth on the final day of the season at Old Trafford on Sunday. Here is the side I think van Gaal will pick:

Goalkeeper: David de Gea is certain to keep his place in goal despite being at fault for the West Ham winner in midweek.

Defence: Matteo Darmian has been ruled out with an ankle injury that he suffered last weekend so Antonio Valencia is likely to continue at right-back. Otherwise, I think van Gaal will stick with the same back four that started at Upton Park with Daley Blind alongside Chris Smalling and Marcos Rojo at left-back.

Midfield: Marouane Fellaini continues to miss out through suspension but Michael Carrick is likely to get a recall after being a substitute at West Ham on Tuesday night. Ander Herrera is the man most likely to drop out after a disappointing game last time out meaning Morgan Schneiderlin could keep his place in midfield. Bastian Schweinsteiger will miss the rest of the season with a knee injury.

Attack: Jesse Lingard could come back in to the side with Juan Mata given a rest while Anthony Martial should continue in attack after scoring twice at Upton Park. Wayne Rooney will continue in his deeper role behind striker Marcus Rashford.

Ashley Young will return to training on Saturday but this game might come a little too soon while Adnan Januzaj has been ruled out after picking up a knock in training. 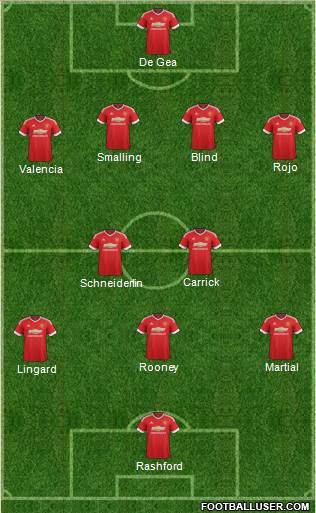