Liverpool take on Sevilla in the Europa League final tonight. Here’s a preview with team news, likely line-ups, betting tips and predicted score for the game Liverpool will look to bring home the trophy when they take on holders Sevilla in the final of the Europa League at the St Jakob Park in Basel tonight.

The Reds have endured an inconsistent campaign in the Premier League with Sunday’s 1-1 draw at West Brom consigning them to an eighth placed finish – their lowest since 2012.

However, it’s safe to say Liverpool have saved their best form for the Europa League with Jurgen Klopp inspiring them to memorable victories over Manchester United, Borussia Dortmund and Villarreal en route to the final.

Tonight’s winners will not only lift the Europa League trophy but they’ll also be rewarded with a place in the group stages of next season’s Champions League, so there’s plenty at stake. Even more so for Liverpool as they’ll miss out on European football altogether next season if they lose this evening.

Sevilla head in to the game having won the Europa League in 2014 and 2015 so the Spanish outfit will be looking to make history and become the first side to win Europe’s second tier competition for three consecutive seasons.

A seventh-placed finish in La Liga ensures Sevilla a route back in to the Europa League next season but Sunday’s Copa del Rey final against Barcelona could turn out to be a distraction for Unai Emery’s side.

Liverpool have no new injury problems and they’ve been boosted by the return to fitness of skipper Jordan Henderson after he made a successful comeback from a knee problem against West Brom on Sunday. However, having played just 30 minutes in the last month, the midfielder may have to make do with a place on the bench tonight.

Divock Origi has been passed fit after recovering from an ankle injury but the Belgian international is also expected to be named among the substitutes, while Mamadou Sakho remains unavailable due to his drugs ban.

Klopp is set to make wholesale changes to his side after resting all of his key men at the weekend meaning the likes of Simon Mignolet, Natheniel Clyne, Dejan Lovren, Alberto Moreno, Emre Can, James Milner, Philippe Coutinho, Roberto Firmino, Adam Lallana and Daniel Sturridge will get recalls.

Sevilla will hand a late fitness test to Jose Antonio Reyes as he’s suffering from a stomach bug while Benoit Tremoulinas, Marco Andreolli and Michael Krohn-Dehli are all missing through injury. 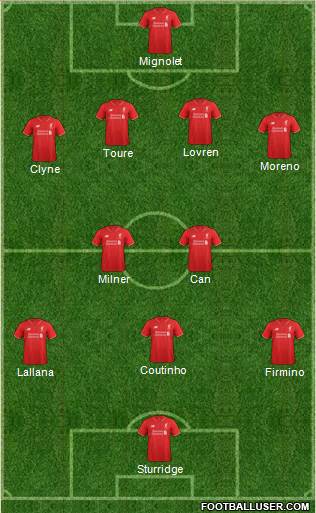 Liverpool 2-1 Sevilla: The holders obviously have a great pedigree in this competition and are a very dangerous side on their day. However, with Klopp in charge, Liverpool are a differen beast in Europe and I can see the German coach outfoxing Sevilla to bring home the trophy with a narrow 2-1 win tonight.

Betting on football has been a difficult task this season as there have been so many unpredictable results. However, if you are going to have a flutter on this game be sure to make full use of all the sign up bonuses to ensure your money goes further. Liverpool are the 13/10 favourites with the bookmakers but if you want a little more value then my prediction of 2-1 is on offer at 17/2 while I also like the look of Sturridge as the first goalscorer at 9/2. If we combine those bets in a score-cast then we get very tempting odds of 25/1.