Arsenal Star Drafted In To Spain Squad For Euro 2016

Arsenal defender Hector Bellerin has been drafted in to the Spain squad for this summers European Championships. See the confirmed 19 players so far.

Arsenal defender Hector Bellerin has been drafted in to the Spain squad for this summers European Championships.

Bellerin was initially named among Vicente del Bosque’s reserve players but the 21-year-old has now been promoted to the full squad following an injury to Real Madrid’s Dani Carvajal.

The 24-year-old was forced off in tears after suffering a thigh injury early in the second half during Madrid’s dramatic penalty shoot-out victory over La Liga rivals Atletico Madrid in the final of the Champions League on Saturday night.

Bellerin won his first full cap during Spain’s warm-up win over Bosnian and Herzegovina on Sunday and the Arsenal man has now been named as one of del Bosque’s 19 confirmed players with the final four to be named later today.

Spain head to France as defending champions having won the European Championships in 2008 and 2012 and they are one of the favourite with lasvegassports.com to lift the trophy once again this summer.

Few would back against them winning it for a third consecutive time but the Spaniard’s must first navigate a tricky group stage having been named in Group D alongside Czech Republic, Turkey and Croatia.

Spain arguably have the strongest squad on paper and there are plenty of Premier League representatives with Manchester United goalkeeper David De Gea, Chelsea trio Cesar Azpilicueta, Pedro and Cesc Fabregas, and Manchester City’s David Silva joining Bellerin in the confirmed 19 so far.

Bellerin’s inclusion comes after a superb campaign for Arsenal that saw him establish himself as Arsene Wenger’s first choice right-back and his impressive form saw him named in the Premier League Team of the Season.

Del Bosque is now set to pick his final four players with Juanfran, Koke, Saúl, Sergio Ramos, Lucas Vázquez and Isco all in the running to make the final 23-man squad which has to be named before the deadline at 12pm tonight.

Here are the confirmed 19 players so far: 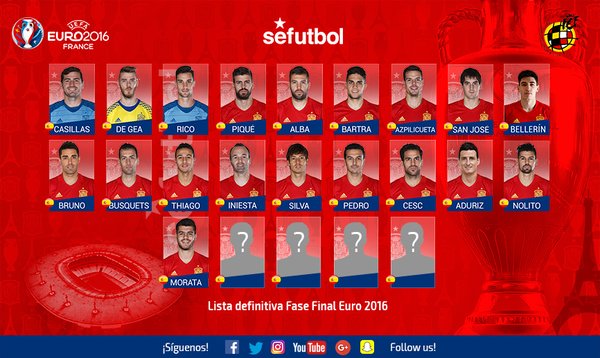